The curse of the Eurotunnel 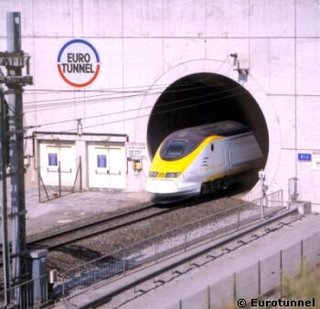 It somehow seems fitting that, with Airbus on the rocks, the future of the EU's Galileo satellite navigation system in question, and the Eurofighter sucking dry the British defence budget for no discernible benefit, that the Eurotunnel should also be on skid row.

According to the Evening Standard, so dire is the situation with this icon of European "togetherness" that the operators have placed the fate of the company in the hands of the French legal system today, filing for the French equivalent of Chapter 11.

This was done by executive chairman Jacques Gounon, who applied for a Procédure de Sauvegarde - similar to the US Chapter 11 bankruptcy protection - after talks with creditors on a massive restructuring of its £2.9bn debt failed. Judges at the Paris Commercial Court are expected to announce on 25 July whether they will approve the application, which will protect Eurotunnel from its creditors.

A panel of judges will decide whether to place Eurotunnel under court protection from creditors for up to 18 months and appoint a court official to supervise fresh attempts to achieve a restructuring deal.

Passenger, freight and shuttle trains through the tunnel were running normally and, if the company wins court protection, Eurotunnel will continue trading under the supervision of Gounon's board, while the court official oversees efforts to strike a deal with creditors.

Meanwhile, says the Standard, a war of words broke out between Eurotunnel and creditors' representatives, with Gounon saying he failed to understand why Deutsche Bank, a leading representative of the bondholders who blocked the deal, had not backed his proposals. Deutsche Bank rejected the charge while the committee of senior creditors, whose members signed the deal in May, blamed Eurotunnel for not making more time for bondholders to negotiate once they finally agreed to talks.

Eurotunnel's problems stem from cost overruns during construction and failure of traffic to hit forecasts. Although revenues are sufficient to cover operating costs and some interest payments, the company is scheduled to begin repaying its loans from January. It has no spare cash to do so. However, Gounon believes if creditors wrote off the bulk of the debt, it could become a viable concern.

Hey, wish I could get a deal like like. Write off my mortgage and I'd be quite well off.