What would we do without the French 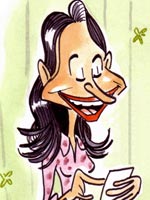 This is actually a genuine question. What would we do for entertainment without them?

The question was prompted by an interesting though somewhat inadequate article in today’s International Herald Tribune, entitled “France’s Mysterious Embrace of Blogs”. The gist of it was that there are more blogs read and written in France than in Germany, Britain or, even, the United States.

“Sixty percent of French Internet users visited a blog in May, ahead of Britain with 40 percent and little more than a third in the United States, according to Comscore, an Internet ratings service.

Likewise, French bloggers spent more than an hour in June visiting France's top-rated blog site, far ahead of the 12 minutes spent by Americans doing the same and less than 3 minutes for Germans, according to Nielsen/NetRatings.

More than three million Internet users, or more than 12 percent of those online in France, have created a blog, according a study released in June by the ratings agency Médiamétrie.”

I have no desire to get too involved in the mathematics of that but in true French style, prefer to look at the semiology of it all. (A character in Joan Smith’s otherwise lacklustre detective stories says that semiology sounded like the science of knowing the half of everything. How true.)

Anyway, nobody seems to know why the French insist on blogging but they do not seem to be creating a network of blogs or a blogosphere. It’s all me, me, me. Or, perhaps, moi, moi, moi.

“French blogs stands out in other measurable ways. They are noticeably longer,more critical, more negative, more egocentric and more provocative than their U.S. counterparts, said Laurent Florès, the French-born, New York-based chief executive of CRM Metrix, a company that monitors blogs and other online conversations on behalf of companies seeking feedback on their brands.

"Bloggers in the United States listen to each other and incorporate rival ideas in the discussion," he said. "French bloggers never compromise their opinions."”

Only someone who has not actually read American blogs thinks that they are not critical. The origin of those blogs was a dissatisfaction with the mostly left-leaning media. The left-wing blogs are highly and often vituperously critical of the Administration and of right-wing blogs. And why should a blogger who never compromises his or her opinion or, rather, never listens to anyone else, be more provocative than someone who engages in discussions with others remains a mystery.

The entire article is an attempt by Thomas Crampton to create an aura of superiority around French bloggers, in the process of which, all he crates is hilarity.

Some of the blogs are political, concentrating on such things as local abuses (largely financial one imagines) which bring trouble to the bloggers. Others are more personal and many of them seem to spend a great deal of time discussing “passionately” why there should be so many French blogs.

Unlike British politicians, French ones have seen the advantage of having a blog but, then again, if they are as dull as the Fragrant Margot’s it hardly seems worthwhile.

At present there seems to be some doubt as to the effect this flowering of blogs might have on traditional French politics. Some commentators hope that they will absorb the energy that would otherwise go into rioting; others point out that last autumn’s riots were often co-ordinated through the internet.

In the same way it is unclear whether the cause of blogs is the fact that it is difficult to complain in France in any organized fashion or the fact that the French are encouraged to be critical and nihilistic. You pays your money and you takes your choice.

What the article does not discuss is whether the more homogenous and tightly controlled media, both print and electronic, should be the cause of this spurt of self-publishing on the net. There is no mention, for instance, how many blogs or websites manage to break away from the French “consensus” of anti-American, anti-British, and, largely, anti-Israeli opinion. How many argue about the need to abandon the accepted model of social and economic statism? Off the top of my head I can think of two: the intermittent in posting but consistently brilliant Dissident Frogman and Liberté-Chérie. There may be others but few and far between.

The article ends with a particularly funny comment from the Director of Web Strategy for Dominique Strauss-Kahn:

“Griveaux, the director of Web strategy for Strauss-Kahn, reckons the popularity of blogs comes down to France being a nation where each and every citizen thinks he or she should be in charge.

"We had 16 presidential candidates at the last election, and we will probably have the same number next year," Griveaux said. "Every French person wants to run the country - a blog is the next best option."”

How reassuringly French and, if I may say so, smug. Is France the only country where everybody thinks he or she should be in charge? Has M Grievaux never been to an English pub? Or read a British discussion forum on the net?

16 presidential candidates, of whom only 3 matter, hardly proves anything. On the other hand, France is probably the only Western country that has allowed its politics to be taken over completely by a small, tightly-knit class, the so-called enarques. This is not a matter of party adherence. Ségolène Royal, at present the leading contender for the Socialist nomination and a blogger (well, more the hostess of an interactive website) herself, is one, as is her partner, François Holland, the leader of the Socialist Party. The one perennial outsider is Jean-Marie Le Pen and, now, Nicolas Sarkozy.

So, where does all this navel gazing leave the French? After all, they can’t be doing all this just to provide us with entertainment, can they? Will blogging lead to a political realignment as it did, to a great extent in the United States and may yet in Britain, or will it remain another outlet for French self-analysis? Watch this space.