Nothing in the middle 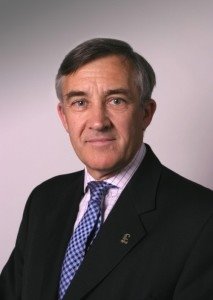 On the back of oral evidence given yesterday by secretary of state for defence, Des Browne, to the House of Commons defence committee, the Conservative Party has waded into the battle of the Land Rovers, calling for improved armour for British troops.

This is in the form of a press release issued by the shadow minister for procurement, Gerald Howarth, on the back of the evidence given by Browne. The secretary of state has at last admitted that our Armed Forces need a level of armour between the heavily armoured Warrior and the lightly armoured Land Rover. Gerald Howarth says:

Des Browne's admission that there is a capability gap in the armour available to our troops on deployment in Iraq and Afghanistan raises serious questions about the Government's commitment to ensuring Britain's Forces have the best equipment. They have failed to provide the Armed Forces with a medium capability between the heavily armoured Warriors and the lightly armoured, but more agile, Land Rovers to allow them to carry out the full range of tasks in Iraq and Afghanistan.

But Howarth's release also offers interesting insight into the total disarray into which land forces procurement has descended. He reminds us that it was always the MoD's intention to have a medium, wheeled armoured vehicle to fill the gap between the Land Rover and the Warrior which, originally, rested on another of those ill-fated European co-operative projects. 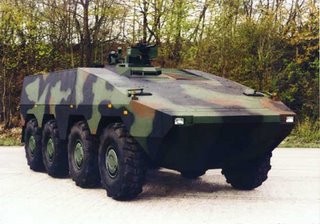 This was the Boxer Multi-role Armoured Vehicle (MRAV), originally an Anglo-German project signed in 1999 and joined by the Netherlands in 2001. But, in July 2003, Britain pulled out after it was realised that the new vehicle, at 31 tons, was too heavy to be transported by the RAF's fleet of C-130 transport aircraft.

Not only did we lose £48 million in the process (a conservative estimate) – this also set back the re-equipment plans, which became subsumed into the Future Rapid Effects System Programme. However, the need for a medium vehicle remained, which was why FRES was originally given an early in-service date of 2009. This was later pushed back to 2010 and, yesterday, David Gould, chief executive of the Defence Procurement Agency, confirmed to the defence committee that the main procurement for FRES had not begun and that there was no in-service date.

With nothing on the immediate horizon, therefore, the Conservatives are demanding that that the government looks to "interim measures which will give commanders in the field a greater range of options, better protected than the Land Rover but more manoeuvrable than the Warrior". Howarth adds:

While we all accept that there needs to be a range of options available to our commanders on the ground, ranging from air transport to foot patrols, it is now clear that there is a shortfall in the range of armour available. It is imperative that the Government re-examine all the options to ensure that our Armed Forces have the best possible equipment to carry out the difficult job which we ask of them. 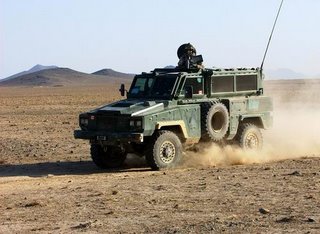 The problem for the MoD and defence planners is none of the platforms being considered for FRES are really suitable for counter-insurgency operations and, while the RG-31 is undoubtedly an improvement on existing vehicles, it is optimised for mine protection and itself can only be regarded as an interim solution. Anything produced will be, as Howarth readily concedes, a compromise but, so far, the MoD is showing no signs of addressing the issue.

This, therefore, has much greater resonance than just defence policy. It is yet another example of the dismal incompetence of the Labour government, the defects of which only now, after nine years in power, are becoming all too apparent.

Incidentally, confirming assertions made on this blog, Des Browne stated in his evidence that the Pinzgauer Vector which enters service in 2007 does not provide much greater protection than the Snatch Land Rover currently in use and also stated that the Panther vehicle, which also enters service in 2007 will not meet the armoured patrol vehicle role required.