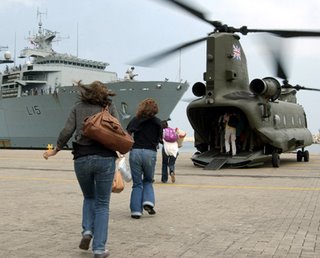 Meanwhile, continuing to demonstrate that the true colossus on the world stage is the European Union, the Finnish presidency yesterday issued a statement declaring that it had completed evacuating most of its 20,000 citizens who wanted to leave Lebanon. Being the generous and magnanimous organisation it is, it has said that it will now help nationals of poorer, non-EU countries with mass evacuations.

The Union said it has also answered appeals from several governments of poorer countries to help evacuate up to 200,000 people, including citizens of Sri Lanka, Philippines, Bangladesh, Ghana, Ethiopia, Sudan and Iraq.

Since only 15,000 Americans have been evacuated from Lebanon since fighting began 17 days ago, and Canada has evacuated some 11,500 nationals, there is now clear evidence that the EU is bigger and better than everybody else. The funny thing is, though, I do not recall seeing a single EU flag on any ship leaving Lebanon.