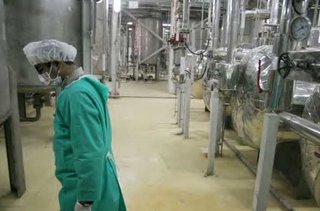 Although there are more differences than similarities, the European Union and Iran seem to have something in common – hubris. This time though, Iran's tendency to overplay its hand can be greeted with nothing but relief – there is no downside.

That, at least, is our feeling if a report from Reuters via DefenseNews can be relied upon, for the news agency is suggesting that "technical glitches" appear to have slowed down Iran's nuclear fuel-enrichment program and put on hold plans to expand it.

This is according to unnamed diplomats who are saying that technical problems have apparently beset Iran's cascade of 164 enriched interconnected centrifuges at its Natanz pilot plant, impeding production. "We have been told of problems from people in a position to know. It's a slowdown in the process although we haven’t been able to quantify it yet," said one.

"We have heard ... that plans for a second and third cascade of 164 are on hold and that the attrition rate in the first cascade is relatively high," another diplomat told Reuters. The first diplomat said unconfirmed reports were circulating that the first cascade, basis for Iranian plans to install 3,000 centrifuges by 2007, had a "failure rate of up to 50 percent."

He said the centrifuges seemed to be showing fragility after being spun at supersonic speeds for most of the past few months, and the nature of materials injected into them - which could involve impurities in the uranium - could be damaging too.

This comes at a time when talks between Iran and the European Union on an offer of incentives to stop it from enriching uranium have stalled (again) and there is nothing substantive on the table. Now, however – undoubtedly influenced by the technical delays - IAEA chief Mohamed ElBaradei has assessed Iran as posing no immediate danger, reaffirming his view that the world powers have ample time to solve the crisis diplomatically.

Interesting how, this time, technical incompetence is getting the EU off the hook.