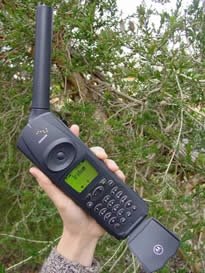 The myth used to prevail that the British civil service was the best in the world, the crème de la crème being the "Rolls Royce minds" of the Foreign Office.

What price therefore the story in The Telegraph today about how thieves ran up a £600,000 bill on the Foreign Office's satellite phones

The details come from a National Audit Office report which retails "an astonishing catalogue of errors" which allowed the thieves to carry on using the phones for up to a year before officials discovered what had happened.

It all started when ten satellite telephones were sent to Iraq in September 2003 but diplomats in the country were not told they were coming, there were no records on whom the phones were issued to and there was nowhere to store them securely.

In a further lapse, the phones were activated in Britain before they were sent, which meant that anyone could use them. The three phones vanished in early 2004 and the first bills started to arrive in July that year. The first phone was barred in August but had already run up a £10,365 bill, the second phone appears to have stopped working in March last year, by which stage £115,963 of calls had been made.

Then, in the last couple of months, the thieves are believed to have set up premium rate phonelines on the tiny Wallis and Futuna Islands, in the South Pacific. They then used one of the satellite phones to call the numbers - which cost £5.94 a minute - running up a £290,000 bill. The final phone was turned off in June last year when alarm bells finally rang about the £594,370 bill that had been run up.

The worst of it all is that in September 2004 a junior official had "raised concerns about the high cost and usage of satellite phones in Iraq" but senior officials failed to take any action.

For sure, this is nothing by comparison to some of the more egregious failures of the MoD, but it is still a hell of a lot of money. By my reckoning, that is two RG-31s, with enough left over to buy every soldier in Iraq a couple of pints and a packet of crisps.

And this is the Foreign Office on whom we rely to manage our relations with the EU. No wonder we so often get taken to the cleaners by France.