What if it works? 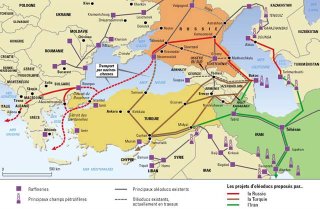 We hear a great deal about the newly strong Russia throwing its weight around, demanding that the United States stopped criticizing her record on democracy and human rights. Everyone has got in on the act: President Putin, of course, who is sneering at America and the West simply wanting to spread their ideas as well as Mikhail Gorbachev, who has told the world that American attempts to impose their political ideas on the world were worse than AIDS (in a country where the problem is growing by leaps and bounds).

ABC News, incidentally, is busy rewriting history about the collpase of Communism as Iowa Voice points out.

None of these people are saying that Russia is a democracy in any accepted sense of the word, merely that others should not criticize them. But all this strength and defiance rest on rather dubious economic achievements. Russia relies almost entirely on the sale of oil and gas for her economic growth and the consequent political strutting.

Naturally enough (this, too, has annoyed the Russians) some Western countries as well as Russia’s neighbours have been trying alternative ways of getting oil and gas out of the region.

One such alternative may be taking off, as the BBC World Service reports:

“A 1,768-km (1,100-mile) pipeline carrying oil from the Caspian Sea to the Turkish Mediterranean port of Ceyhan is set to be formally opened. The Baku-Tbilisi-Ceyhan pipeline links Azerbaijan, Georgia and Turkey. Oil is then shipped to western markets.”

There are hopes that a second pipeline along the same route, carrying gas, will be opened by the end of the year. The two pipelines will not be a solution but alternatives to existing sources seem like a good idea. Furthermore, it will give Turkey an increased clout in the political arena.

“Ankara is currently negotiating to host several other international gas and oil pipelines, hoping to become a major transit and terminal country for fuel.”

If Russia can throw her weight around, Turkey can learn to do so. At which point, it will be slightly difficult for the EU to huff and to puff about freedom of speech in that country (after all, you don’t hear much huffing and puffing about the media being controlled by the government in Russia).

Turkey’s highest court has upheld a suspended sentence against the Turkish-Armenian writer Hrant Dink, who had written a version of the Turkish massacre of Armenians in 1915 that does not tally with the official one. He is thus deemed to have offended against Article 301 of the Turkish criminal code that penalizes insults to “Turkishness”.

The words pots and kettles spring to mind here. EU countries penalize unfashionable opinions like David Irving’s (once again I must point out that under no circumstances would I defend or exonerate Irving, only his right to make a complete fool of himself).

The EU is also the organization that is constantly looking for ways of overcoming old-fashioned nationalist terminology and is trying to create a system of words that could insult minorities even if said minorities are demanding the beheading of journalists who publish cartoons they do not like.

Oh and let’s face it, the EU’s record on the Danish cartoons is distinctly mixed with the Austrian President calling for media self-censorship, ooops, sorry, I mean self-restriction.