Who is this man? 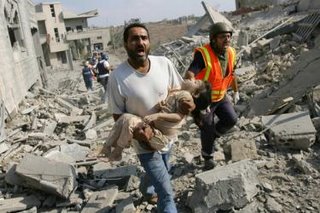 If he had been a genuine rescue worker, he would deserve a medal. Mr "Green Helmet" is everywhere at Qana, rushing around pulling children out of the rubble, carting them to ambulances and even, on the front page of the Guardian, escorting "White Tee-shirt", who also performs his own cameo role, carting round the body of another unfortunate girl, emoting freely while he does so.

That photograph is credited to Nicolas Asfouri of AFP/Getty Images and the caption reads, "A man screams for help as he carries the body of a young girl after Israeli air strikes on the southern Lebanese village of Qana". 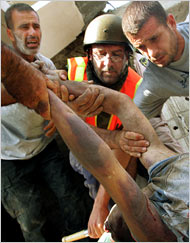 The New York Times, however, has "Green Helmet" dragging the body of yet another unfortunate child from the ruins, this photograph attributed to Tyler Hicks of The New York Times. The caption reads, "Rescue workers recovered bodies at the scene of an Israeli air raid on the southern Lebanese town of Qana on Sunday".

We also get one more shot of the baby dragged from the rubble – yet another pose to add to the many already published. This time, "Blue Tee-shirt" is standing behind the baby's body, holding its head up to make a more dramatic picture.

The picture itself is in Arab News with the caption, "A dead child, a victim of Jewish terror, is taken out of a destroyed building in Qana on Sunday. The pacifier of the child is seen hanging from the vest, a mute testimony to the innocent victim's tragic end." The photograph is attributed to EPA. 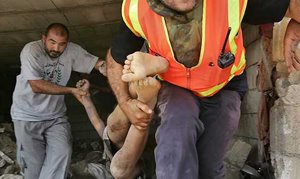 A picture remarkably similar to that in The New York Times is also offered by Reuters, attributed to Zohra Bensemra. Its caption reads, "A Lebanese volunteer rescuer carries a child killed in the Israeli air raid in Qana." It looks like the same child, but "Green Helmet", seems to have swapped positions for the camera with "Grey Tee-shirt".

Gulf News, on the other hand, has "Green Helmet" carrying the body of the girl shown in the previous post, but in yet another, slightly more picturesque location. This shot carries no attribution and the caption is not related to the picture. It refers to the cessation of air strikes by the Israelis.

But the great tragedy for Qana, of which we are constantly reminded by the media, is that this is history apparently repeating itself. On 18 April 1996, the village was also visited by death and destruction. re-visiting the photographs of the time, however, who do we see at the centre of the action? Why, "Green Helmet" of course. This is a younger man, without his glasses, but recognisably the same man, in his now classic pose of handling a victim of an Israeli "atrocity".

His presence at Qana on Sunday, and his central, unchallenged role, cannot have been a coincidence. Is he a senior ranking Hezbollah official? If not, who is he?

And here he is again! 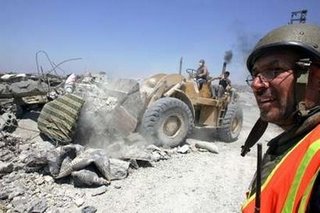 This time, according to Reuter's Zohra Bensemra, "Green Helmet" is a Lebanese rescue worker, watching "while a bulldozers clears away the rubble of a building demolished by an Israeli air strike in Sreefa, 18 miles (30km) south east of the port-city of Tyre(Soure)". The dateline is 31 July, 2006, at 10:37 am.

Doesn't Hezbollah have anyone else the media can photograph?