Mulling over the implications of the Israeli situation, our activities in Iraq, Afghanistan and elsewhere, and following on from my post about the need for new thinking, my deliberations were given a new focus by an e-mail from a reader.

He had been to a presentation on UK Maritime Trade Operations in the Gulf/Middle East and offered a "few interesting facts".

In the Red Sea, Arabian Gulf/Indian Ocean and Persian Gulf area, he was told, there are generally about fifty coalition naval vessels (mostly frigates and destroyers) dedicated to security and anti terrorist operations.

To put this into context, this is twice the number of frigates/destroyers left after the Hoon cuts and more than twice the number sent to the Falklands in 1982. They are supported by submarines, maritime patrol aircraft (including RAF Nimrods) and various shore based facilities, as well as tankers and other support vessels.

Twenty of these vessels are kept in the Persian Gulf itself, with four on station at any time of the Iraqi coast. Furthermore, there are similar operations performed by NATO warships in the Mediterranean, while vessels carrying equipment, ammunition and other stores for UK forces have to be escorted by the Royal Navy. This includes ships carrying materiel stuff to Pakistan for use by UK forces in Afghanistan.

The increased operation tempo, combined with the cuts of the last few years, means that it is not just the Army (and elements of the RAF) which are suffering from overstretch. The Navy is also suffering badly as well, particularly since the UK has other commitments. As a result, nine-month deployments are becoming common, with an adverse effect on morale.

This is not helped by the uncertainty over the future carriers and the seventh and eighth Type 45 Destroyers but, more to the point – like the Army and Royal Air Force, they are largely equipped to fight a different sort of war from that which it is present undertaking.

It is all very well having the hugely sophisticated and expensive Type 45s, geared to knocking advanced fighters and bombers out of the sky, or massively costly aircraft carriers to support the European Rapid Reaction Force, but much of the Navy's work is in low intensity tasks such MIOPS (maritime interdiction operations – i.e., challenge, board and search potential smugglers) or deterring piracy and other forms of maritime crime. 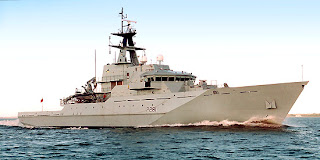 For this, we are told, there is an urgent need for a number of fast, armed patrol vessels. Such vessels need a flight deck and hangar for an embarked helicopter, plus accommodation for a number of Marines/Special Forces - perhaps an upgraded River Class offshore patrol vessel, or even this little Italian number (below). 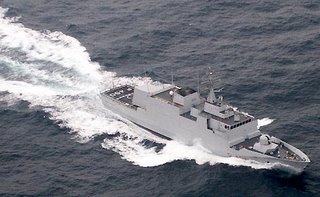 In the longer term, this might be cheaper than keeping high-tech, multi-role frigates on station, such as HMS Kent (type pictured, top left) which was recently the lead RN ship in the northern Gulf. On the other hand, additional, dedicated patrol vessels might allow the UK to take a more active role in stopping the oil smuggling which is undermining the Iraqi economy.

What all this again points to is the need to re-orientate our thinking, and address the actual tasks confronting our armed forces, rather than fantasy tasks, perhaps in pursuit of EU foreign policy objectives, some time in the unforeseeable future.

This, to some extent, was what Liam Fox was getting at when he delivered his speech on defence in June, but the real debate has yet to start. Unfortunately, it seems, the Boy King is tiptoeing away from any such thought. As always, the debate will have to start without him.