Don't do it again and you can keep your pension 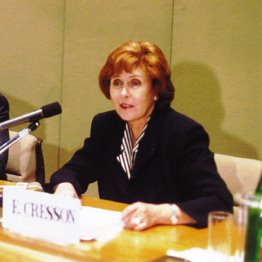 Phew, what a relief. It seems that the former French Prime Minister and former European Commissioner Edith Cresson is not doomed to a penurious old age. I’d hate to think that she might have to have survived without her haute couture or her tasteful jewellery, not to mention all those holidays, private dentists, what have you.

After two years of, no doubt, intense discussions the ECJ has ruled on her case and has said that yes, indeed, she was guilty of “a breach of certain gravity” of Article 213 of the EU Treaty by finding a lucrative job for a friend (and dentist).

As our readers will recall, at the time Mme Cresson could not understand what all the fuss was about. Is that not how political deals are done? If it weren’t for the puritanical Brits and Scandinavians, she sniffed haughtily … (She can’t have known much about the Blair government.)

The Advocate-General, Leendert Adrie Geelhoed, recommended in February that she should lose half her pension as punishment but the court in it wisdom has decided that

“The finding of breach constitutes, of itself, an appropriate penalty.”

It does? Well, I am sure there are a lot of fraudsters out there who would like to see this to become a precedent. The very fact that you have been charged and had to appear in court is punishment enough. We need not bother with anything else. Merveilleux.