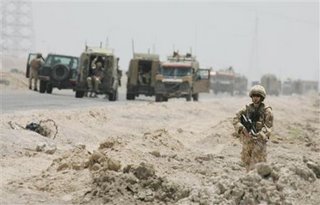 Less than two weeks ago, we remarked how a veil of secrecy has descended over the conduct of the British occupation of Southern Iraq.

Not least was the MoD's news blackout over an incident on 16 July when two soldiers were wounded when their vehicle was hit by a roadside bomb, according to AFP, on the road to Al-Zubair, southwest of Basra, lightly wounding them.

The obvious and immediate question was the nature of the vehicle the soldiers were travelling in, but the MoD refused to release any further details for "reasons of operational security". The next day, therefore, Lord Astor of Hever asked the defence minister Lord Drayson in the House of Lords whether he would confirm whether the troops had been in a Snatch Land Rover but, such is the utter contempt Labour ministers have for any notion of transparency or accountability that he simply ignored the question.

Remarkably, though, we have found a photograph of the incident (above left), taken by an AP photographer and published on the Italian Yahoo news site (link now broken). As rather expected, the scene shown is a convoy of Snatch Land Rovers, amongst which is the damaged vehicle.

Particularly noteworthy is the width of the road and the wide open spaces, making a mockery of Drayson's earlier claim that the RG-31 was too big for the roads of Basra. 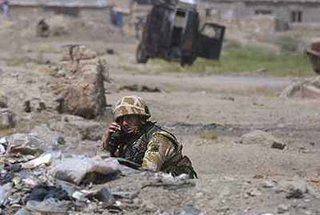 Altogether now, we have collected over 100 photographs of Land Rovers on patrol in Southern Iraq – including now ten damaged or destroyed vehicles (two more of which are show here) – in none of which could the location be described as restrictive. In fact, in all the scenarios where bomb damage has occurred, an RG-31 and even the newly ordered Cougars could easily have gained access. Needless to say, though, not one photograph of a damaged Land Rover has ever appeared on an MoD website.

If these are but small examples (in the grander scheme of things) of the grip of British censorship, what are we to make of an article in Azzaman?

This is a warning from Basheer al-Najafi - one of the four main ayatollahs in the Shiite religious leadership which includes grand ayatollah Ali Sistani – that security conditions are worsening in several cities in southern Iraq amid reports of clashes between Shiite militias and the British troops in the region. 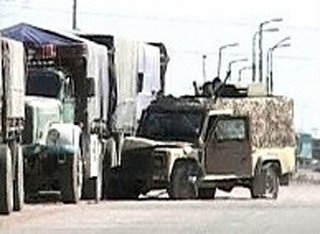 Says Najafi, in at least three big cities – Basra, Amara and Diwaniya – the militias are almost in full control and have clashed with foreign troop or bombed their bases. "Conditions have aggravated a great deal and reaching the climax," he added. "We are afraid that the day of a massive popular uprising is approaching that will result in grave and unpredictable consequences."

Furthermore, Shiite religious leaders in the holy city of Najaf are reported to have warned the government of Nouri al-Maliki that they may no longer be able to contain the masses and prevent a popular uprising in the absence of security.

This is from an Arab newspaper and we cannot comment on its accuracy or impartiality. But we also cannot compare it with reports from any more reliable – perhaps – UK sources. There simply are none, although this gives useful background. This is Blair's other "forgotten war".

But, even if attention is elsewhere, that doesn't mean that nothing is happening or about to happen. We may be reminded all too soon.