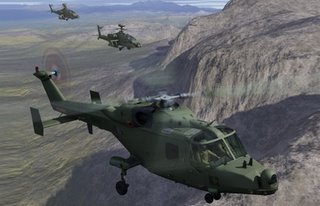 If ever an illustration was needed of the utter contempt with which this government – and especially the Ministry of Defence – treats Parliament, you need go no further than look at the answers to two questions put to the Ministry, and the answers given.

The first, a written question tabled on 2 July, which was finally answered on the 13th, sought information about military helicopters. Owen Paterson, MP for North Shropshire, asked:

...whether his Department has carried out an evaluation of deploying (a) the Hughes 500 and (b) other light utility helicopters as convoy or patrol escorts in Iraq; and what assessment he has made of the merits of the use of machines of this type in such a manner would enhance force protection for British troops in convoy or patrol in (a) Iraq and (b) Afghanistan.

This was probing issues raised on this blog where, at one, we have learned that there are only six Lynx helicopters deployed in the whole of the British zone in Iraq and that their eventual replacements will not be ready for delivery until 2014, at the stupendous price of £14.2 million each. We were looking, of course, to see whether the MoD had considered using cheaper helicopters.

The response, given by Adam Ingram, minister of state for defence, was as follows: 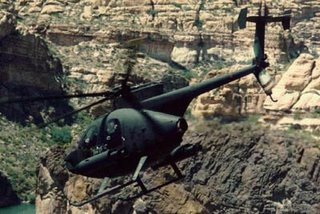 Readers can readily see from this that Ingram simply does not answer the question. He is asked very specifically about one type of helicopter and then other similar types. He ignores this and instead, tells us something we already know – that we have Lynx helicopters, which he chooses to call a "light utility" helicopter which, at nearly five tons maximum take-off weight, it is not (compared with less than two tons for the Hughes).

As to his claim that it "can be used for escort duties if commanders judge that appropriate", with six in theatre, with an availability rate only slightly above 50 percent, that means there are on average three effectives available to commanders at any one time - and that is without the general clampdown on spares and fuel and rationing in Afghanistan. There, it seems the situation is even worse than Iraq with only four Lynx allocated to Helmand - an area four times the size of Wales - where they have to carry out resupply tasks, while also doubling up as gunships and be available for medical evacuation duties. Then, because of the extreme temperatures and thin air, they can normally fly only between dusk and dawn.

For sure, in either theatre, a commander can use Lynx for escort duties, but only at the expense of something else. For most times, therefore, this is like saying that I can use a Rolls Royce to go shopping. Indeed I can – in theory – except that I do not have one.

Pitching into the fray yesterday, however, was Viscount Astor of Hever who asked about the incident revealed yesterday, when two soldiers were wounded by a roadside bomb in Basra. Can the Minister confirm, he asked:

...whether they were in a Snatch Land Rover? If that was the case, how many more soldiers will be killed or wounded before Ministers take action? Will the Minister responsible for the Defence Procurement Agency and the Defence Logistics Organisation now insist that those bodies set to immediately to provide commanders on the ground with an armoured option before they have to resort to Warriors? 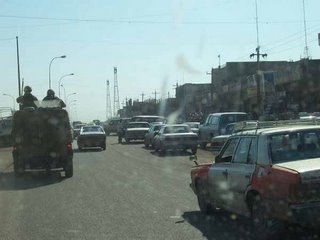 Lord Drayson (it was he) responded, but again it cannot be said that he answered the question. He simply ignored it:

My Lords, as my right honourable friend the Secretary of State has announced, we are undertaking a review of our protected patrol vehicles in Iraq and on operations in Afghanistan. We anticipate taking action following that review, both on short-term solutions and on the longer-term solutions that we have already announced. However, I stress that, given its mobility and size, the Snatch Land Rover has an important role to play, particularly in areas such as downtown Basra (er... as illustrated?)

However, we do see something of a shift in emphasis on the "Snatch". It "has an important role to play...". This is slightly different from his 12 June pronouncement when he said, "The Snatch Land Rover provides us with the mobility and level of protection that we need."

Anyhow, we are none the wiser as to whether a Snatch Land Rover was the target of this weekend's bomb attack. Drayson did not deny it, he did not confirm it – he did not even refuse to answer. He simply ignored the question. This is contempt of the highest order and if ministers ever wonder (should they ever) why we reciprocate and hold them in such contempt, then all they need to do is read the pages of Hansard.