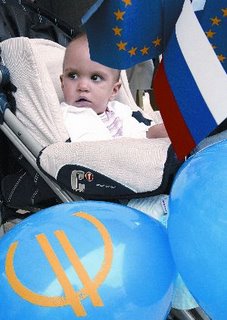 Just what the EU needs – that "Ah!" factor, captured by a roving Reuters photographer, as grateful Slovenes (and their children) gather in Brussels to celebrate Slovenia joining the euro as from 1 January 2007. But were the celebrations as spontaneous as they appeared on film?

The following e-mails might shed some light on this:

Following the European Council discussion of 15-16 June, the ECOFIN Council on 11 July is scheduled to pave the way to the introduction of the euro in Slovenia as from 1 January 2007 onwards.

The Director General for Economic and Financial Affairs, Klaus Regling, cordially invites you to participate in the media event taking place in Brussels after the ECOFIN Council meeting on 11 July to celebrate this historic moment.

During the event, traditional Slovenian specialities will be served and Slovenian live-music will entertain the visitors. Furthermore, the children of the visitors are very welcome to participate in a balloon release.

Time: at around 3 p.m. (once the ECOFIN meeting will be finished)
Venue: Rond-Point Schuman in the European quarter of Brussels
We kindly ask you to register through the attached fax reply form.
Please bring the confirmation of your registration to the event. Thank you in advance for your understanding.

and later, to a member of the Council staff…

I hope you are well.

Once again we have to ask you for a favour: For the event on Rond Point Schuman on July 11th we still need children for the balloon release. So far, only 14 children are registered, some of them are really young. We would like to have at least 20 children for the balloons release. Would you be able to check with some Slovenian friends of yours and see if you can convince some of them to bring their chidlren to the RPS for the event? (DG ECFIN is rather picky with their invitation management, therefore, it would be good if you would forward the invitation below only to people who have children and with some probability will come to the event. (That's the catch now at this point: They have to bring the little ones! )

If they are interested, they should fill in the fax form attached as well as the declaration of consent (that they are okay with their children being photographed and this material can be used by the EU) and fax it to the number mentioned on the form.

Thank you very much!

I hope we will see you next week?

One wonders, of course, whether all the EU staff who took part in these "spontaneous" celebrations were paid for the time they took off work.