This one will have legs 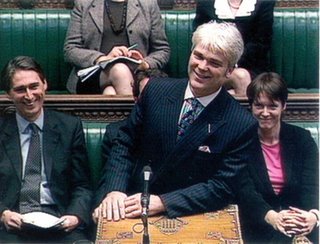 You have to give it to Desmond Swayne for being aware that the Common Fisheries Policy is an issue with the Conservative Party – and note that the Sunday Times, like so many other newspapers, have completely failed to recognise its significance.

This we glean from the Sunday Times article today, which publishes a commentary on Swayne's leaked e-mails, taking a typically trivial approach to the subject, concentrating mainly on the "tittle-tattle" about personalities within the party.

The e-mails in question were from Desmond Swayne, the MP for New Forest West, in his capacity as parliamentary private secretary (pps) to the Boy King. Tagged the "bag carrier", the post-holder is supposed to keep the leader of the opposition up to speed on sentiment within the parliamentary party and it was in pursuit of this activity that the e-mails were sent.

Conveniently, the Sunday Times posts links to all eight e-mails on its own site (link above) but the first one is ignored. It reads:

That Fish has had too much prominence; that we have higher priorities, and that consequently we wave (want?) to downgrade the policy, is something that colleagues will understand. To abandon it completely however, will put some colleagues in great difficulty. It is a totemic issue and the flak will be significant. And what do we gain except that we are left without an effective critique of one of the most disastrous consequences of EU policy? (Also it does not help to have a mince head as the spokesman).

Predictably, the Sunday Times picks up on the "mince head" comment, without identifying the target of the epithet, other than as "a spokesman on European matters".

Tittle-tattle aside, what comes over from the e-mails is the profound concern within the parliamentary party at Cameron's "perceived silence" on the European Union. Senior members are said to be feeling "depression and even dismay" at his stance.

Indeed, says the Sunday Times, Cameron's European policy emerges as one of Swayne's greatest worries. Several e-mails are devoted to the leader's pledge to withdraw from the EPP. Swayne warns that the EPP pledge has backfired and alienated all sides of the party.

He writes about the "depression and even dismay" in the context of concern about European attempts to sneak some provisions of the moribund EU constitution into law, adding, "The feeling of frustration and impotence is compounded by our perceived silence on things European. It is also a prime source of the grumbles in our mailbags." Some MPs believe that the Cameron's silence might push the "army of activists" to defect to the UK Independence Party.

All of this indicates that the Boy King has troubles on the EU front – not least his ditching the policy on fishing – which will not be helped by Swayne’s suggested response. Aware that, "in this vacuum", "stunts" like the Freedom Association's "Better Off Out" campaign tend to thrive, he suggests that:

...we might offer some comfort (or merely diversion) would be to up the ante on the Making Poverty History agenda which would inevitably involve a powerful critique of EU trading policy and stalled reform of CAP.

It is that phrase in brackets that will have activists fulminating – the "diversion" comment. If he is reading the Boy's mind correctly, he knows that his leader has no intention of engaging seriously on EU issues. In writing the comment, Swayne has thus confirmed what many activists either knew or suspected.

Swayne himself has not been available for comment since the e-mails were leaked and the Tory faithful are hoping the story will die down, submerged in the torrent about Prescott. For myself, once the implications of what Swayne is saying have struck home, I believe this one will have legs.