Makes sense when you think about it 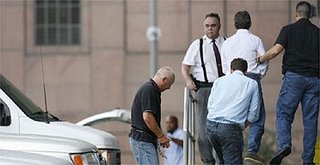 The Lib-Dims have published on their website an edited version of the speech their Shadow Home Secretary, Nick Clegg, made in the debate about the extradition of the NatWest bankers.

His argument is that the agreement with the United States that was incorporated into British law in 2003 is uniquely wrong because at present it is not reciprocal. There is a good deal to be said for that point of view but Mr Clegg rather blows his credentials with the following comments that oppose the terribly unfair agreement with the United States to the amazingly just and fair agreements we have with our European partners of different description:

"First, as I mentioned, we have reciprocal agreements with those countries, but none of the arrangements have such wildly differing evidential burdens. Hence our support for the European arrest warrant which, as I said, is based on symmetry between the parties that entered into it, and is reciprocal between nations. The US-UK agreement, by contrast, is unique in its lopsided provisions. Secondly, Council of Europe countries are all signatories of the European convention on human rights, which is not binding on the United States. Any contravention of the ECHR by a Council of Europe state subsequent to extradition can be reviewed by the European Court of Human Rights, but such judicial review is not available to individuals extradited to the United States.’"

Brilliantly argued Mr Clegg. The European Arrest Warrant may introduce symmetry but it also introduces several criminal offences that simply do not exist in this country. Are we to consider it to be completely fair and just for people to be arrested for xenophobia and carted off to some European country because there is a reciprocal agreement there?

As for being signatories of the European Convention of Human Rights, only a Lib-Dim could think that it was worth the paper the signature was written on, when it comes to such bona fide members of the Council of Europe as Albania or Azerbaijan (just to stay with the 'A's)