One day they will get it right 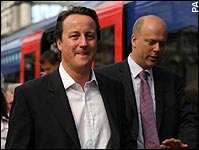 In their continuing struggle to find the “Clause 4 moment” the Conservatives have come up with an interesting new chestnut. We were wrong, they say, in privatizing the railways the way we privatized them. In other words, the breast-beating is all about the separation of track and train.

“We think, with hindsight, that the complete separation of track and train into separate businesses at the time of privatisation was not right for our railways.

We think that the separation has helped push up the cost of running the railways - and hence fares - and is now slowing decisions about capacity improvements.”

Well, one can argue that one. My own memories of the pre-privatization British Rail are not particularly rosy. As for one’s experience of the non-privatized London Underground and Transport for London in general, it cannot possibly be described on a family-friendly blog.

Nevertheless, the separation of track and train is a contentious issue and it is reasonable for the Tories to look at it again. That can’t precisely be defined as a U-turn, more of an adjustment.

There is just one problem. It is called Council Directive 91/440/EEC of 29 July 1991 on the development of the Community's railways. Section III of this not very long document is entitled: “Separation between infrastructure management and transport operations”. Yes, that’s right, this is our friend “separation of track and train into separate businesses”.

Actually, to be quite fair to the Directive (not words one hears from me at all often), Article 6 says:

In other words, one company can split into two and keep separate accounts in order to run both track and train. Possibly that is what Mr Grayling was talking about, though I doubt it. But it might be a good idea if, just for a change, a Tory spokesman managed to work out where exactly a specific piece of legislation comes from and to what extent any British parliament can change it.