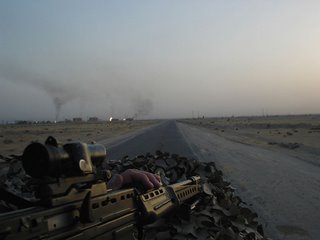 Following on from my piece yesterday, the International Herald Tribune this morning carries a long piece about the oil smuggling racket in Iraq.

Attacks on oil pipelines, which are often attributed to insurgents, it says, are more often part of a racket to force the transport of oil by road, allowing criminal gangs to cream off their cut, and extract protection money from truckers.

Much of the smuggling problem is due to the differential in prices, with oil products being heavily subsidised on the Iraqi domestic market, but the scale and brazen nature of the smuggling beggars description.

Apparently, there are now eight illegal anchorages on the Shatt al Arab, the waterway that runs between Basra and the Persian Gulf. They have names worthy of a Robert Louis Stevenson novel: Hjam Island, Al Tahaddi, Mhejran, Al Zuher. The paper says:

That extensive smuggling trade apparently takes place right under the noses of British, American, Iraqi, Iranian and Kuwaiti authorities operating on ships and on the coast of those same waters. Col. Larry D. McCallister, a commander of the Army Corps of Engineers in southern Iraq, said Iraqi construction workers were regularly attacked while trying to build a new Iraqi coast guard post along that shoreline because they happened to find themselves at a prime smuggling location.

Colonel McCallister said that once the crews recognized their predicament, they negotiated with the smugglers, who eventually agreed to move their operation a short distance up the coast.

Given that the corruption endemic in the system and the huge flow of illegal cash is funding the insurgency and destablising the government, no great improvement in the Iraqi situation will occur until the oil smuggling problem is addressed.

Effectively, the British government is being held to ransom by the oil smugglers, being forced to commit troops to the region for as long as there is political instability and continuing violence. If Mr Blair want a quick exit from southern Iraq, therefore, one of his highest priorities should be sorting this problem out. Instead, it seems, the British authorities – with others – are turning a blind eye.

In a grown-up world, our own Parliament would be debating this, the media would be bringing it to the public’s attention and there would be pressure for it to be resolved. But in this infantile world of ours, such issues are far too complicated and remain undiscussed. We really should be ashamed of ourselves.