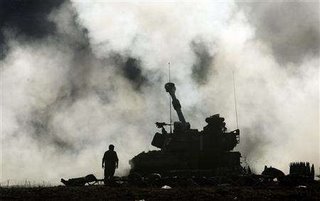 There is nothing so terrifying as the EU when it finally resolves to take action. A mere one month after its ultimatum, the commission is brooking no backsliding and is preparing to take legal action in the highest court in the Union against the defaulters. No quarter will be given in what is a battle for the survival of the whole of mankind.

This robust action is being taken against the 18 member states who have committed the ultimate crime against humanity – they have failed to submit their CO2 quota plan in time for the next phase of the EU emissions trading scheme starting in 2008.

Thus does it strike me that we have all got it all wrong in our attempts to bring peace to the Middle East. As the EU rightly demonstrates, there are far more important things than the relatively trivial issue of terrorists murdering Jews. After all, is there not a universal scientific consensus that global warming is the greatest danger ever to affect mankind?

On this basis, the way forward – where true consensus does lie - is in addressing the global warming issues raised by warfare. Never mind the fragmentation from its shells – has anyone thought of the CO2 emissions given off by an Israeli 155mm howitzer? And, while most of the Katyushas fired off by Hezbollah impact harmlessly on the countryside, every single one leaves a trail of deadly CO2 and other greenhouse gasses.

While useless at peacekeeping, this more deadly problem is something for which the EU is uniquely equipped. As a matter of urgency, it should apply its highly successful emissions trading scheme to the armies of the world. Every combat unit should be required to register with the EU commission and declare the CO2 emission potential of its weapons, in return for which the gifted bureaucrats in Brussels can issue them with individual carbon quotas.

Then, on a year-by-year programme, the quotas can be steadily reduced until – say – by the year 2020, the allocations will be so low that no country will have an allowance more than is necessary to fire a 24-gun salute to the EU, in grateful recognition of its contribution to world peace – and reducing global warming.

In the interim, of course, a modified version of the carbon trading scheme can apply. Those armies which actually plan to use their weapons – and might exceed their quotas – can buy credits from armies that are keeping their troops In their barracks. European armies should do well out of that. 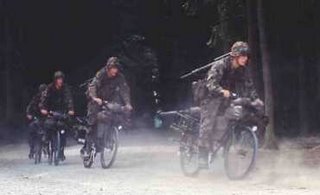 Clearly, before mounting any offensive (or defending themselves), troops will have to ensure that they have sufficient carbon credits and they will be expected to keep accurate records of all carbon emitting activities that they undertake. A band of EU carbon monitors can be recruited, using low emission vehicles (pictured), to police the battlefields of the world. They can enforce cease-fires when the quotas have been exceeded, on pain of heavy fines if the warring parties fail to comply.

As to the more immediate problem of the Middle East, the most obvious and effective way to bring about an immediate cease fire is for the Israelis to buy up Hezbollah's carbon quotas. With vigilant EU monitors on the scene to force quota compliance, the guns would fall silent and the planet would be saved.

Can I have my Nobel Peace Prize now?