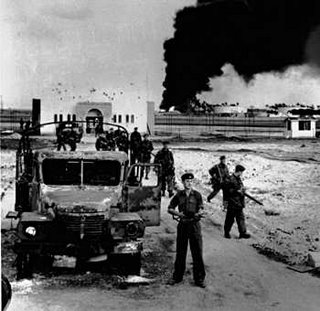 Tomorrow is the fiftieth anniversary of the Suez Crisis, the picture alongside having a familiar aspect. But for the grainy black-and-white quality, it could easily represent what is happening today.

Even the BBC today, though, acknowledges the seminal role this Crisis had in the formation of the European Union, happening as it did at a crucial time in the negotiations over the Treaty of Rome – something we discussed in an earlier post.

It was also, possibly, the last (and first) time in history that the French, British and Israelis co-operated in a joint venture, and without the approval of the United States. How different things are today, when the US is the staunchest ally of Israel and France one of its strongest critics.