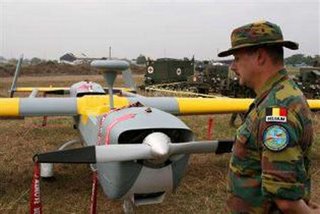 The comedic character of the European Army in the Congo continues – only with more tragic results this time.

According to Reuters, via The Washington Post, a Belgian UAV flying over Kinshasa has crashed, setting a house on fire and injuring five people.

This, it is reported, with not a little understatement, is a setback for the European Union military force, EUFOR, that was deployed in the central African state with great fanfare to protect civilians during today’s general election vote.

The craft was flying its first reconnaissance mission over the capital when it crashed into the house on Friday. The five injured people were suffering burns. EUFOR said it had lost contact with its remote handler. "This drone flying over Kinshasa for a first technical flight is intended to take photographs and is not armed," the force said in a statement.

Not is this the first little upset. On Thursday, two French Mirage jets had stoked already simmering political tensions by flying low at high speed over the capital. Unfortunately, their over-flight coincided with the outbreak of a big fire which destroyed part of the compound of a presidential candidate and former rebel leader, Jean-Pierre Bemba.

The unexplained blaze killed two children and some of Bemba's bodyguards accused the jets of bombing the building, a charge EUFOR denied.

Nevertheless, angry Bemba supporters went on the rampage, looting a church and torching several buildings. Three police, two soldiers and a civilian were killed in the disturbances, raising fears that violence could disrupt voting.

Had the incidents been caused by American or Israeli forces, the betting is that the news would have been on the front page. But, since the European Union seems to be about as good at peacekeeping as it is everything else, this activity, despite the tragic results, belongs in the comic section.