"We are on our way to a European Army" 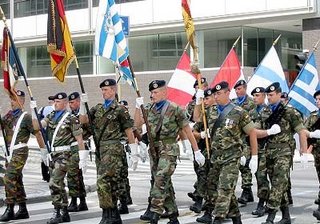 At a meeting in Brussels today, Claude-France Arnould, Director of Politico-Military Affairs at the European Council declared that the EU Battle Groups were more a tool for political integration than to attain military objectives.

It was also suggested that though unpopular, in future soldiers could be committed to EU operations through qualified majority voting, a situation that could lead to the UK opposing a military action, yet unable to stop British troops being deployed by the EU to fight in missions that have no support or justification in the UK.

Karl Von Wogau MEP, chairman of the EU parliament committee – and member of the EPP, the group to which the Conservatives still belong - professed himself pleased with the outcome of the meeting, declaring, "We are on our way to a European Army".

That much was brought to us by UKIP staffers in Brussels who attended the meeting. If their subsequent press release, fronting their Party chairman, Campbell Bannerman, is somewhat strident in tone - suggesting that this is "yet another example of our surrender to the superstate" – it is more than a little understandable.

As we pointed out in an earlier post, the "colleagues" are deadly serious in their ambitions and have already achieved a great deal. They will keep pushing the agenda, as they have been doing ever since 1952, with the proposed European Defence Community, and will not give up on their ambitions.

Of course, nothing can come of further defence integration unless the member states agree and it is thus highly significant that today also we get an article in the French daily, Liberation, calling for precisely that.

Penned by Laurent Fabius, former socialist prime minister, he – like so many other of his ilk – invokes the spectre of global terrorism, arguing that national defence plans cannot meet the threat, declaring that it is necessary to look to Europe. "The situations where our armies will have to intervene on a purely national theatre of operations will rare and these operations will be limited," Fabius writes. "It is at the European level that we will have more and more to determine the number of planes, tanks, aircraft carrier or warships necessary to our safety."

Fabius goes on to remind us that it is more than fifty years since "the founding fathers of Europe" proposed the creation of a European army. For various reasons, he says, that failed. But, in this new century, American strategic interests are moving away from Europe, which creates another opportunity to provide the foundations of a European army. 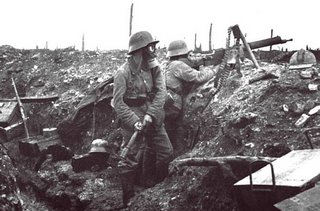 As so often in French politics, Fabius then goes on to invoke "the Franco-German engine" as creating the driving force, and says he thus intends "to propose to our German friends the idea of a common army by 2015, one century after Verdun."

It seems to me that Fabius is a little shaky on his history, as the battle of Verdun started in 1916, which would put his hundredth anniversary in 2016, but it is evident that he intends to invoke the powerful symbolism of that event. It was, after all, Verdun where, on 11 November 1984, that François Mitterrand and Helmut Kohl staged the final act of reconciliation between France and Germany.

Nevertheless, Fabius believes that the anniversary will "constitute at the same time a splendid symbol and a strategic need." And the creation of a Euro-army will, hew concludes, "allow us, with us French, to defend our fellow-citizens vis-a-vis the new threats, and in Europe to be an international and decisive actor of peace."

As for Britain, we are so far down the slope of European defence integration that it will be but a small step for us to join the merry band. The justification, when it comes, will be that we do not want to be left out, and that we will be needed to create the balance between the Germans and the French, to stop the bilateral alliance becoming too strong.

Whatever is then offered, the scenario is not fiction. Too often and for too long, we have dismissed continental ambitions as empty rhetoric, only later to discover that they are deadly serious. And neither is it rhetoric when Karl Von Wogau MEP declares, "We are on our way to a European Army". He means what he says, and means to make it happen.