And now... the European Army 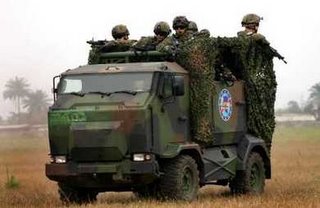 I'm sorry, I really didn't mean to do another "toy" post so soon, but I really couldn't resist this one – Reuters at its best.

The Agency reports that French and Portuguese troops from a European Union Force have been performing military exercises in the Congolese capital Kinshasa. These are part of the contingent of 1,000 soldiers sent to the Democratic Republic of Congo ahead of this month's presidential and parliamentary elections.

Soldiers parachuted into their Kinshasa base from helicopters before special forces teams performed a simulated hostage rescue and the force illustrated how it could quickly deploy men and armoured vehicles. "We have tried to show you that we are credible and ready to fulfil our mission," German General Karlheinz Viereck, commander of the EU mission, told the audience after the display at N'Dodo airport. 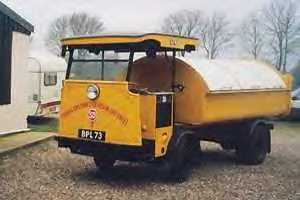 Accompanying the Reuters' story is the picture shown above – presumably one of the "armoured vehicles". I thought I knew most of the equipment used by European forces, but I haven't the faintest idea what this is. To me, it is reminiscent of an old corporation dustcart, not dissimilar to the one seen in the 1971 feature film when the Dads Army platoon hitch a ride back to Walmington-On-Sea from their manoeuvres (thank you Anoneumouse). As a piece of military hardware, it definitely lacks that "wow" factor.

I only hope that the Africans who watched the display were able to contain their mirth when they watched this machine trundle into view. However, I suspect many of them would have been too busy wetting themselves even to hear General Viereck's pompous little statement, much less take it seriously.