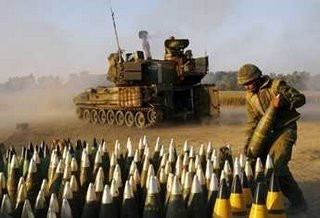 It may be a small point, but at least twice in the Telegraph's despatches from the Middle East, the latest being today, reference has been made to "Israeli 150mm artillery shells". The point is, of course, that there are no such things – they do not exist. The calibre, if you are using Western ordnance, is and has been for decades, 155mm, as can be seen from Reuter's "picture of the month".

If we cannot rely on the detail, however, what confidence can there be in the accuracy of the bigger picture painted by the media, or of their understanding of what is going on?

For instance, while the media have been presenting lurid pictures of the destruction wrought on Beirut by the Israeli air force, it takes Little Green Footballs to show a map illustrating how localised is the damage, the bombs targeted with considerable precision on Hizbollah strongholds.

On the other hand, it takes specialist journals like DefenseNews (and many of the blogs) to point out that Hezbollah has accumulated an arsenal of between 10-15,000 missiles, a programme which has been bankrolled by Iran to the tune of $20-50 million a year over the last 20 years.

What one must point out, also, is that these missiles have little if any military value. Their one role is to strike the civilian areas of Israel and, as we also know, the warheads have been adapted to maximise casualties. These are, therefore, "terror weapons", which point to the true intentions of Hezbollah, which likes to characterise its troops as "resistance fighters". Their weapons, however, brand them as terrorists. 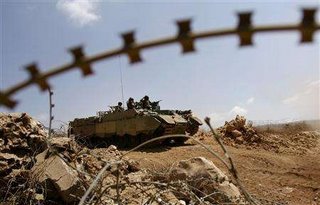 Meanwhile, pictures of Israeli armour from the northern front tell their own story. Inevitably, the Merkava tanks feature prominently, but few journalists seem to be aware that these, as well as their primary function, can carry up to eight troops. Uniquely, therefore, they are a combination of tank and armoured personnel carrier.

But what is probably more significant is the profusion of vehicles characterised as APCs, of which there are photographs in abundance. They look like and are, turretless Centurion tanks, known as Pumas (pictured above). 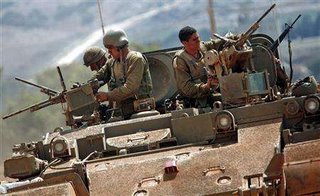 Interestingly, but predictably, none of the journos seem to have understood their role. Despite being personnel carriers, they are used not by infantry formations but by combat engineers. The name "Puma" is an acronym for Poretz Mokshim Handasati (minefield breakthrough vehicle). Their role is essentially route opening, neutralising mines, booby traps and other explosives, to clear the way for the main fighting formations.

I may be reading too much into this but logic suggests that if the Israelis are committing forces to route clearing, then they must be doing this for a purpose. Logic again would suggest that the current "incursions" are something more than that. Where the spearhead leads, much else tends to follow. 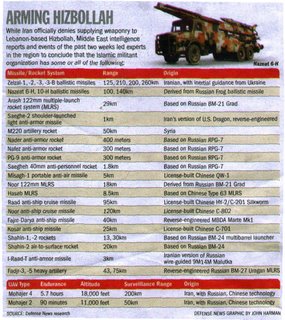 All of this rather puts into perspective the talk of putting a cease-fire in place by next week. As long a Hezbollah has an untouched arsenal of tens of thousands of "terror weapons" – including some of the longer-range Iranian Zelal-1 missiles(see graphic: double-click to enlarge) – Israel cannot and will not waver in its determination to destroy it, along with the military structures that make the terror campaign possible.

Classically, therefore, it would seem that those who are calling for a cease-fire are misreading the situation. Typically, that is the line being taken by the EU, which is to hold "emergency" talks on 1 August, when the focus will be on a follow-up "stabilisation" force, to which EU member states have declared a willingness to join.

Israel, though, has every reason to distrust multi-national forces and would rightly be reluctant to rely on security guarantees from them, especially as Hezbollah seems to be rejecting any idea of a "robust force" in the region. The terrorists, we are told, want only an expansion of the current UNIFIL mission with the same mandate.

Thus, while US Secretary of State Condoleezza Rice is back in the region for further talks, and the tranzies gear up for their interminable debating sessions in the expectation of an imminent cease-fire, the situation on the ground seems to offer conflicting signals, pointing towards prolonged military action.