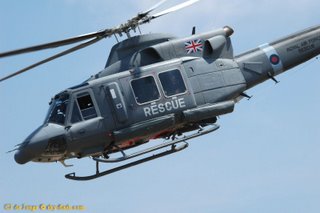 As my colleague informed us on Friday last, European Union Foreign Policy chief Javier Solana was on his way to Lebanon to sort out the growing crisis.

What we did not know at the time was that the EU official was to be flown from a base in Cyprus to Lebanon by British military helicopter. "At the request of the EU presidency, UK helicopters are flying Javier Solana to Beirut for talks," a Defence Ministry spokesman said before Solana's arrival on the island.

As it stands, the only British military helicopters permanently stationed on the island are four Bell Griffin HAR2s operated by 84 Squadron, used primarily for search and rescue. Unless the British flew another type of helicopter in specially for Solana, or one was temporarily based there, it would have been one of these helicopters that would have been used.

It is unlikely that these helicopters could be deployed elsewhere but, nevertheless, why is the British government lending the EU helicopters when we are so short elsewhere? And did the EU pay a commercial rate for the hire, or is this another of our invisible contributions to the greater glory of the EU?