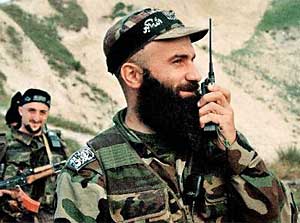 As most of our readers would have seen the Russian media has announced that Shamil Basayev, the most wanted man on the government’s list, has been killed in a special operation in Ingushetiya. The fact that the news comes from the Head of the FSB, Nikolai Patrushev, need not make us think that it is untrue. Sometimes even those guys tell the truth.

The Chechnyan war (or conflict if you are a journalist) is outside the scope of this blog normally, but there is, I think, a need to counter the hysteria that is taking over large chunks of the media and the blogosphere.

It has always been my contention that people who do not know any Russian history should not write about that country. That, of course, is true about any country (and we only need to look at the amount of tosh that is written about the United States in Europe, including Britain). But, somehow, Russia excites the wildest and most ignorant comments. Having read a goodly number of past accounts written by foreign visitors and journalists about that country I can safely assert that this has been true for some time.

The Chechnyan conflict consists of a series of wars, periods of uneasy peace and bouts of quite startling brutality. It has been going on for over 200 years from the beginning of the Russian expansion into the Caucasus and at various times in various degrees involved the neighbouring territories or countries of Ingushetiya and Dagestan. (Among other Russian writers Lermontov and Tolstoy wrote about the area and the wars in the first half of the nineteenth century.)

It is worth recalling, as we survey the quagmire in which the Russian troops have found themselves in the last ten years, that the victorious Russian army of Alexander I, which had chased Napoleon and the Grande Armée from Moscow to Paris between December 1812 and spring 1814 then went home and became bogged down in thirty years of fighting against the Chechen leader of the day, Shamil.

It is also worth recalling that in 1944 the entire Chechen and Ingusheti population was rounded up by the MVD on Stalin’s orders and transported to Siberia, whence relatively few returned. Soldiers, NCOs and officers who had fought valiantly in the Red Army against the Nazis joined their families or what was left of them.

That is part of the background. One must not forget that the war that is going on now was launched effectively by Putin as he was made Prime Minister and designated as successor by Yeltsin. Nobody in Russia or among Russians abroad believes that those unexplained and hotly denied explosions in Moscow apartment blocks were carried out by Chechnyans. There just seemed no point to them. After all, the Chechnyans had got a kind of a deal with the Russian government, negotiated by General Lebed (also since deceased in an air accident).

During this second war (well, second of the recent bout of fighting) Putin has made sure that Yeltsin’s mistakes were not repeated. The media has largely been banned from the area. The few journalists who have managed to get through, have been harassed, attacked, kidnapped, even murdered. Since then, of course, almost all of the Russian electronic media and a goodly part of the newspapers have come under government control.

The organization that was responsible for rousing public opinion in Russia during the first war, the Union of Soldiers’ Mothers, was thrown out of their offices and generally subjected to extensive harassment.

We have little idea of what is really going on in Chechnya and the surrounding area. We do not even know the scale of Russian casualties.

The incomplete information that has come out points to large scale brutality on both sides with little help to the civilian population, which by now consists mostly of very old people and young children with the few women who have managed to escape. At various times well-meaning western organizations have tried to send humanitarian aid to the Caucasus. The destination of the aid has remained unknown.

None of this is meant to exonerate Shamil Basayev who, unlike Aslan Maskhadov, the Chechnyan leader killed some months ago, had not been elected by the people of that autonomous republic, did not wish to negotiate with the Russians and boasted openly his responsibility for a number of atrocities and hostage taking episodes. So the hysterical jumping up and down in glee is justified to an extent.

It is, however, worth looking at some of the details. Firstly, Chechnyan sources are insisting that he was killed as a result of an accidental explosion not by Russian troops.

Secondly, the story, as given out by the Russian media, is once again highly convenient to Putin. Basayev is supposed to have been planning an attack in southern Russia to spoil the forthcoming G8 meeting in St Petersburg. It is possible that he decided to take lessons from the British jihadists of last year. It is also possible that the actual operation was carried out before and announced now to bolster Putin at what was, until now, promising to be a very difficult G8 meeting. Or none of it is true and he died in an accident. Who knows?

Let us, for the moment, assume that the news is true. Basayev has been killed. This is a matter for rejoicing in the same way as the killing of Zarquawi was. Will it bring the end of the bloodshed any closer? That is unlikely, as the Russian intentions have little to do with constructing a working and relatively peaceful society.

Will this mean that the butcher responsible for all those deaths in the Moscow theatre siege of 2000 and in Beslan in 2004? Well, actually, no. Basayev was, on his own boasting, responsible for starting both those bloody episodes, as well as the hospital siege in Budyonnovsk 1994 (another murky episode) and several hostage takings, hi-jackings and explosions.

What actually happened in Moscow and Beslan, both coyly described by the media as “resulting in so-many deaths” and “causing world-wide outrage”. 129 people were killed in the Moscow theatre siege, all but about 6 by the Russian security forces when they stormed the building, shot all the hostage takers (thus there could be no trials afterwards), having filled the building with poisonous gas that killed and incapacitated the various hostages. These were dragged out of the theatre, thrown into various cars and taken to hospitals round Moscow where the doctors were not told which gas had been used. Neither they nor foreign medical teams who stood by to offer help had any idea of what the antidote might be for several days.

There has never been an enquiry and all attempts by survivors to find out the truth or to get some compensation have been brusquely dismissed. Putin announced that the operation was a huge success. Too bad about the people who died but what can you do? Can’t make omelettes without breaking eggs.

Even if we disregard the numerous conspiracy theories that have been circulating in Moscow, the rescue operation has to be seen as a completely incompetent botch-up.

Beslan in many ways was even more appalling, not least because the casualties were higher – over 300 – and because so many of them were children. Nothing can possibly excuse or explain away the hostage taking of a school, the terrorizing of children and their teachers. (There have been some attempts to establish what happened that autumn and a murky story of incompetence and corruption has been partially unravelled.)

Given with what ease the MSM attacks American and, even, British behaviour without ever bothering with evidence, it is extraordinary how mealy-mouthed the accounts of Beslan have been. All we are told is that as a result of the siege 300-odd people died and there was an international outcry, because of who the victims were.

We are not told too often that the Russian authorities refused to negotiate with the hostage takers not simply about their demands (clearly, one cannot do that) but even about supplying food and water and possibly releasing some of the hostages, despite the fact that countries with experience in these matters, such as Britain, immediately offered help. When the ex-President of Ingushetiya did negotiate, some of the children were released. The indication is that the Russian plan had always been to storm the building.

The actual storming, triggered off by a sequence of events we still do not know, was a mess. For some reason local inhabitants, armed with shotguns were allowed to join in. The forces and the civilians rushed in shooting in all directions. It remains unclear how many of the children and teachers were killed or injured by the Russian security forces.

While the siege lasted some of the media was allowed reasonably close but not journalists who knew anything about the background. Andrei Babitsky of RFE/RL who had already been kidnapped once in very mysterious circumstances, was picked up on some trumped up charges by the police and released too late for him to make his way to Beslan.

The redoubtable Anna Politkovskaya was badly poisoned on the flight to southern Osssetia and was taken to hospital in a coma. She barely survived. Of course, this could be a coincidence.

The world-wide outcry was as nothing compared to the Russian one. Both local and national governments were forced into some enquiries and the one surviving hostage taker has just been tried and sentenced to life imprisonment. The miasma of an appalling cover-up, of a complete refusal to find out what really happened before, during and just after the siege, continues to poison the lives of relatives and survivors.

These things need to be said, not in order to exonerate Shamil Basayev - there can be no exoneration for someone like him – but in order to understand why the Chechnyan war is not completely part of the war against terror and why it will not be ended by the man’s death. There have already been far more deaths than in Iraq and there will be many more. Unlike in Iraq, no solution appears to be forthcoming.