See also Fox News which has an IDF video on its site (advert first). 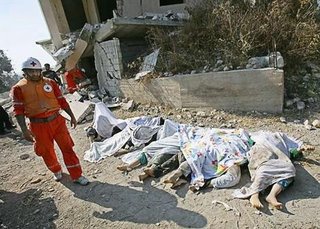 The BBC has gone into overdrive this morning over the news that an Israeli air strike killed at least 51 Lebanese civilians, including 23 children, in the southern village of Qana.

A more comprehensive and balanced online account comes from the Sydney Morning Herald which pulls in multiple agency reports and news from other sources.

The attack, the paper has said, has prompted the Lebanese government to cancel a planned visit to Beirut by Condoleezza Rice, with Lebanese Prime Minister Fouad Siniora saying he would hold no negotiations before a ceasefire. Officials have said they had told Rice to stay away from Beirut until the fighting stopped. Siniora has denounced "Israeli war criminals" and is demanded an immediate, unconditional ceasefire and an international investigation into "Israeli massacres".

But what makes the Morning Herald's account more balanced is that it conveys details of the Israeli response, retailing the IAF stating that the air force was unaware that civilians were sheltering in a building. "We did not know of the whereabouts of civilians in the village," IAF spokesman, Lieutenant-General Dan Halutz was quoted as saying by the NRG Maariv website after meeting President Moshe Katsav.

A senior air force commander said a precision-guided bomb was dropped on a home in Qana on the assumption that it was sheltering Hezbollah crews that had fired several volleys of missiles into northern Israel. "Had we known there were that many civilians inside, especially women and children, we certainly would not have attacked it," the commander told Reuters.

Asked how Israel's intelligence services could know about missile launches from Qana but not about the presence of dozens of civilians, the commander said: "We are capable of detecting missile launches because they are very dynamic."

By contrast, he said the civilians appeared to have been holed up in the building for days, and were therefore almost impossible for aerial surveillance systems to discern. According to this spokesman, Hezbollah had launched scores of missiles from Qana into Israel, including one that hit a hospital. He said several of the launched took place within a few dozens metres of the house that was bombed. 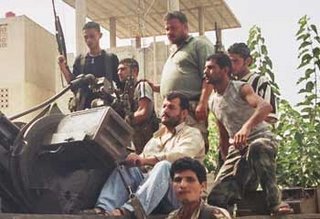 What we don't get from the BBC and its other left wing fellow-travellers is any sense of this. Only from the blogs and other sources (not least, last week’s superb editorial in The Business and more recently documented by the Australian Herald Sun, which supplied the photograph shown right) do we get any understanding of what is going on.

Only through these sources do we learn that Hezbollah gunmen (in civilian clothes) have been preventing civilians from evacuating, have been deliberately using civilians as "human shields" and have been employing strategies for maximising Israeli "collateral damage" in order to provide a potent propaganda weapon, a ploy which the western media so easily fall for.

But the fact is that Hizbollah have turned southern Lebanon into a war zone. They have been deliberately provoking a response from the Israelis, who must protect their own population. The civilians in the region are being used as pawns in a wicked game, the results of which we see Qana. 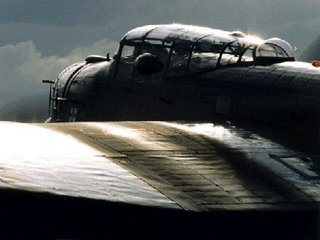 In the greater scheme of things, it is also fascinating in a macabre way, to see how values change. In July 1944, for instance, the RAF’s Bomber Command launched a ferocious attack on a narrow area of northern Caen in an attempt to break the German resistance, despite considerable doubts having been expressed over the utility of such an attack.

In all, 467 British Lancaster and Halifax heavy bombers dropped 2,276 tons of bombs, yet not one single dead German or any enemy equipment was found in the area that had been bombed. The French, however, were not so fortunate. Despite massive evacuations, many French civilians perished, estimated at between 3-400 to as many as 1,000. In all, French civilians killed in the Battle of Normandy are put at between 20,000 and 67,000. 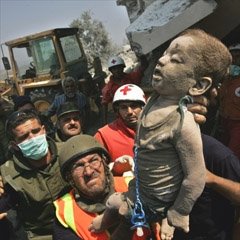 Civilian casualties in war are always regrettable and the death toll in the Second World War is still subject to much debate. But, what is different now is that such casualties are being used actively as a weapon of war, where propaganda is as potent as bullets in achieving strategic aims. The media have been given free access to photograph the bodies of victims, many of which, conveniently, have been wrapped in transparent polythene sheeting.

Typically, the European Union has fallen for the propaganda. According to the AFX agency, the Finnish presidency of the EU has said it was shocked and dismayed by Israeli raids on the Lebanese village of Qana. "There is no justification for attacks causing casualties among innocent civilians, most of them women and children," the presidency said in a statement.

Before the outrage directed at Israel spreads too far, therefore, commentators might do well to remember the past. In this, perhaps, it is interesting to note that, on the back of Qana, the calls for a ceasefire have intensified. I wonder whose interest that serves?

Update here, which indicates that the building sheltering the refugees was not targeted. Our own forum reports that Fox News has been showing footage of Hezbollah missiles being fired from Qana.

Also, the Security Council is meeting today, with Kofi asking it to condemn the attack.

Update at 7 pm: Olmert has issued a statement claiming that Qana has been used as a base for launching missiles against Israel, backed up by IDF video footage showing missiles being launched (broadcast on BBC News 24 on the 7pm bulletin). Blair, speaking from California, says, "these atrocities must not be allowed to continue".

Update at 8.10 pm: According to Israel National News, Senior IDF officers say there is a contradiction in the timing of the bombing of Qana and reports of the explosion. Air Force Commander Amir Eshel left open the possibility that Hizbullah terrorists blew up the building or that an unknown cause set off explosives which were stored in the structure.

He explained that recorded information shows that Israeli Air Force planes bombed the building between midnight and 1 am and that the next attack at 7:30 am was up to 500 yards away. He said reports of the killing of civilians came around 8 am. "It is not clear what happened" between 1 am and 8 am, he said.

ABC News reports that the "missiles" (their word) struck just after 1 am, while Reuters reports that police said Qana was bombed at 1:30 am (2230 GMT on Saturday).