A culture of denial

It was in April that the EU - led by a triumphal commissioner for information and society, Viviane Reding – launched its top-level .eu domain. And of course, with the world media watching, it was all a wonderful success as "Europeans" rushed to register their names.

Only a few days later, however, the truth began to emerge. The launch had been a mess, with a series of front registrars buying up domain names in order to "wharehouse" them and sell them later for a profit.

According to one source, the practice of warehousing was flagged back in April by Internet monitoring service Ipwalk, which reported that a total of 1.6 million .eu domain names had been registered, but a disproportionate amount (75,000) by Cyprus. It population is only 800,000 yet it had registered more domain names than France, population 60 million. This week, Ipwalk reported that, following EURid's decision on suspension, the number of .eu registrations in Cyprus plummeted from 85,000 to 12,300. 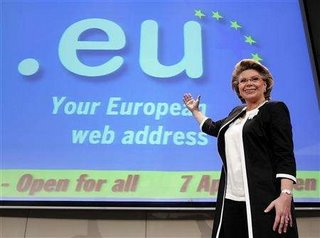 Also at the time, Bob Parsons, CEO of GoDaddy.com, was particularly voluble in his complaints to EURid, which handled the sale on behalf of the commission. He said his company tied to warn EURid of the potential for abuse, but its cries "fell on deaf ears." What makes this a typical EU story, though, is his comment that so many complaints were filed that EURid simply stopped responding to them.

Then, as the EU soaked up the publicity and the glory for a "successful" launch, all further complaints, in the classic EU fashion, were staunchly denied. EURid spokesman, Patrick Linden declared, "We verified that each registrar was an individual legal entity," although he did acknowledge that some might "have played the system".

Now – once the media interest has died down – the truth comes out. EURid has had to suspend over 74,000 .eu domains and 400 registering companies are been taken to court after a review of the system had revealed what was known at the time – that a small number of companies had registered several hundred phantom companies in order to manipulate the system.

All the 74,000 domains registered by the 400 registrars are now in the hands of just three companies - Ovidio Ltd, Fausto Ltd and Gabino Ltd, which have been waiting to clean up, after EURid failed to make the necessary checks before the domain went live.

Furthermore, this is only the start of the review and many more "phantoms" are expected to be discovered. Bob Parsons now complains that EURid's action appears to be a case of shutting the stable door after the horse has bolted.

It now appears that Parsons' comments were spot on, even if they were denied at the time. But, even after having been comprehensively caught out, EURid is not planning to take action against companies which may have set up scores of subsidiary registrars. "We don't plan to do anything as long as there has not been a breach of the contract each signed with us," says Linden.

There we have it – the classic EU culture of denial, followed up in each case by tardy and inadequate action, all accompanied by a refusal to accept responsibility for failure. Where have we seen that before?