What's behind the theatre? 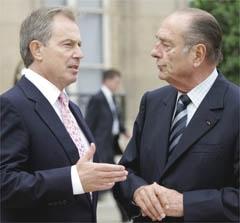 Lots of reports of the Blair/Chirac meeting in today's press, with the general consensus being that the dynamic duo were doing their best to “show unity”, not least The Times, which incorporates that sentiment into today’s headline. The paper goes on to say they patched up their differences, insisting that they would be a force for harmony in Europe.

The Independent had it that they were trying to "paper over the cracks" in their relationship and "publicly putting their differences behind them", all despite "their contrasting visions of Europe".

Interestingly, it is the "Eurosceptic" The Daily Telegraph that puts the most positive spin on the meeting, telling us that "Blair and Chirac seek 'new vision' for Europe", although The Guardian is not far behind with "Blair and Chirac join forces on Europe".

Much more than that we do not know. In fact, all the press reports are remarkably similar and equally thin. That illustrates that we are being sold the PR version of the event, with none of the commentators offering any real insight – or any at all - as to the issues actually discussed.

In more than one way, this is disturbing and should be the cause of concern. Although this was our prime minister talking to the head of state of a foreign power, Blair was not speaking as only prime minister but also as the representative of the EU presidency to a fellow member of the European Council, one of our alternative governments. Thus, for what he said, he is not accountable to his own Cabinet, nor to Parliament and certainly not to the British people.

And, while the hacks lap up the theatre staged for their benefit, who knows what was really said – what deals were hatched up or agreed, and what the real agenda is. The press go away happy and file their copy, television gets a few minutes air time out of it, and BBC's Newsnight run their usual lightweight, ill-informed shout-up on a slot to which I was invited to participate but refused.

But, as the circus moves on we are none the wiser and have no way of becoming wiser. This is our government at work and they owe nothing to any electorate. Our role is to enjoy the theatre and then, in the fullness of time, do as we are told and pay the bills. Merde.