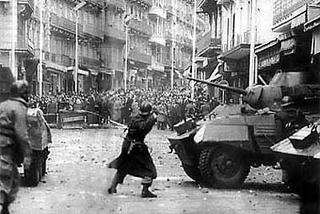 One does not want to write endless stories that show our closest neighbours, just across the Channel, in a bad light but then they should not behave in a bad way.

France remains the one former imperial power that has found it difficult to shed that role. Partly this is because the French empire dissolved rather more painfully for the mother country than the British did. Other European powers lost their empires during various upheavals.

As we have seen in the Côte d’Ivoire, the Middle East and Rwanda, France still hankers after an imperial role and goes to great lengths to preserve its power and influence in former colonies and dependencies. This rarely works. If all else fails, Francophonie is armed to the teeth as the Hutus were in Rwanda.

The truth, however, is hard. So, to avoid having to deal with it the French government did what it always does when there is a problem: it passed a law. This law requires that school textbooks should be changed to portray France in a positive light in its colonial past and, especially, in its behaviour in North Africa.

The Algerian war was remarkably savage on all sides, with the French behaving before and during it in such a way that, once again, they would not have passed those famous Copenhagen criteria.

Then, with General de Gaulle deciding that the time has come to withdraw, despite his earlier promises, about one million French colonists and, more to the point, the harkis, the Algerians who had fought with the French, were abandoned to their fate.

While the French pieds noirs largely escaped to France, the fate of the harkis was terrible. The fact that the Algerian FLN politicians fell out with each other in a nasty way was no consolation to anybody. But, one presumes that none of this will appear in the new legally required text books.

The law was passed in February but has become public knowledge recently, when a number of historians have petitioned to have the law repealed. The Education Minister, Gilles de Robien, announced that no textbook will be changed and President Chirac has reportedly called the law a “screw-up”. There have been protests from the Algerian government as well.

The problem is that the law stands until it is repealed and eventually schools and publishers of textbooks will have to obey it. Such are the rules of the centralized French educational system.