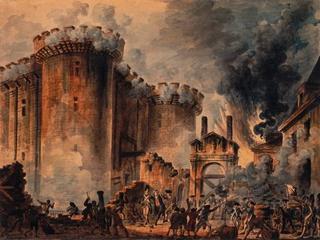 Once again we are indebted to some of our readers for this story. According to a report by the International Observatory of Prisons, presumably one of those organizations French politicians and other grandees are always telling Americans to listen to, French prisons are “akin to dungeons in the Middle Ages”.

As the Scotsman put it:

“Hygiene is "deplorable", with inmates crowded into filthy,rat-infested cells, leading to an explosion in the number of prisoners with infectious diseases, the International Observatory of Prisons (IOP)said.

It described conditions as "catastrophic" and condemned the French government for failing to improve matters. "The situation is totally unworthy of our level of civilisation. Conditions of detention are close to those of the Middle Ages," the Paris-based IOP said.”

Oh dear. It seems that Abu Ghraib and Guantanamo are not the worst places on earth, after all.

The organization, which is based in Paris, to add insult to injury, went on:

“French jails suffered from overcrowding, bad hygiene, rising violence and suicide rates of more than six times the national average - France has Europe's highest suicide rate among prisoners. The number of suicide attempts rose 10 per cent last year, while incidents of self-wounding and hunger strikes were up 25 per cent.

Violence and revolt against the prison authorities have also increased dramatically - there was a 155 per cent rise in the number of riots last year.

Eight out of ten inmates suffer from psychiatric problems, but access to medical care is limited.”

Another question springs to mind: if France were applying for EU membership now, would the country pass the test of the Copenhagen criteria with that sort of treatment of prisoners? I think not.

Prisons have figured largely in French history. There was, of course, the storming of the Bastille on July 14, 1789, which released the vast number of seven prisoners. It would have been eight, but the Marquis de Sade had been transferred to the insane asylum, Charenton-Saint-Maurice, on July 4.

Then there was the unfortunate episode of the September Massacres. In 1792, fearing the rapid advance of the Prussian army, fearing even more that many citizens of Paris would welcome them as liberators from the revolutionary government, angry about the lack of food and egged on by the radical propaganda, the mob broke into the prisons where enemies of the revolution were, dragged them all out and murdered them in various rather horrendous ways.

Many revolutions start with prisoners being released by mobs and should one happen now in France, with the prison population filling up 115 per cent of the available space, according to the report, a large number of people would suddenly find themselves at liberty.

Fortunately, for the French establishment no revolution seems to be on the horizon.