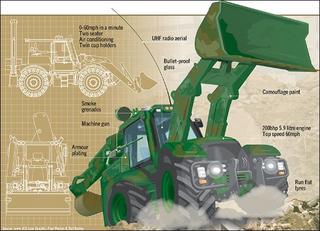 In the week that there was some serious news about the march of defence integration, much of which has been covered in this blog, I see the Sunday Telegraph's "defence correspondent", Sean Rayment, has swung into action.

But anyone who expected any intelligence from Sarah Sand's dumbed-down rag is going to be sadly disappointed. Rayment is offering us a really penetrating story about the US Army's decision to purchase high-speed backhoe loaders from JCB.

In an excitable story, complete with a graphic which would not be out of place in a "Boys' Own" comic (above), Rayment tells us that the United States Army, "the world's most powerful military organisation," has unveiled its latest secret weapon in the war against terror - a JCB digger that can travel at 60 miles an hour.

"Camouflaged to protect it from enemy fire (...er?) and equipped with machine-guns, armour, bullet-proof glass and smoke dispensers," he gushes, "this latest vehicle is the biggest, fastest and most expensive digger ever to go into production…. It is also equipped with 'run-flat' tyres, which will allow it to escape from ambushes even if the wheels are damaged by small arms fire, and is fitted with a second seat that will enable another soldier to ride 'shotgun'." 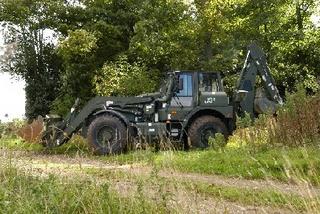 Oh, p-leaze. Seekers after the truth can quickly find out from JCB's own website that the company has been awarded the contract, expected to be worth up to $140 million, for what is termed the "High Mobility Engineer Excavator" (HMEE) vehicle. The company helpfully publishes a photograph (right), which of course looks nothing like the Telegraph graphic, lacking for instance the fanciful "bull bar" and light clusters, which would actually be ripped off the moment the machine was used.

It has been designed, says JCB, to meet the requirements specified by US Army TACOM for a backhoe loader capable of speeds up to 57 mph. The objective of the HMEE concept, it adds, is to have a machine capable of travelling at military convoy speed without the need for transportation by a truck and low-loader trailer. And, in a far cry from Rayment's puerile commentary, it tells us that "a fully armoured version is under discussion," itself nothing unusual. Armoured construction vehicles were around in the Second World War and are in daily use in hotspots such as Israel.

Oddly enough, there is a serious story tucked underneath Rayment's drivel, by the same man, headed "Half the Army's combat vehicles 'unfit for war'." And from where does Rayment get this information? Ah! It actually emerged in response to Parliamentary questions from back-bencher Ann Winterton, the Tory MP for Congleton, Cheshire, to Adam Ingram, the Armed Forces minister.

The information is part of a wider story that is being left to Tory back-benchers to pursue, in the absence of any activity from the Tory front bench. It reflects how the MoD is cutting back in hundreds of different and damaging ways in order to afford its profligate spending on re-equipping the Army to form part of the European Rapid Reaction Force.

Fortunately, to tell us something about this, we have the paper's real defence correspondent, Christopher Booker writing in his column - in what has become, effectively, a paper within a paper. There is also a certain Richard North writing in The Business about how the government's "Europe first" policy is undermining Britain's defences.

Those are the adult bits, leaving the "real" papers to do the "Boys' Own" stuff, which is about all they are fit for.