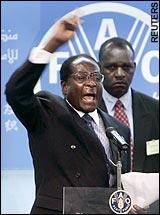 Bush-haters and opponents of the Iraqi war will undoubtedly be delighted to learn that they share common cause with that great democrat Robert Mugabe who, in a diversion from his scripted speech at yesterday's World Food Day event organised by the United Nations Food and Agriculture Organisation, called Tony Blair and George W Bush "the unholy alliance of the millennium".

According to the Telegraph report today, he then went on to compare the two world leaders to Adolf Hitler and Benito Mussolini and accused them of interfering in the domestic affairs of countries such as his own. To applause from the delegates, he then blamed Britain and the United States for his country's economic collapse.

It is perhaps entirely predictable that Mugabe should use such a public opportunity to attack Bush and Blair in such a despicable fashion, but it is still slightly shocking that he should receive a round of applause for so doing.

Thank goodness, therefore, that we have the inestimable Mark Steyn in the Telegraph today to provide an antidote.

In his column, headed: "Sometimes it is worth going to war", he provides a commentary on the rightness of the Iraqi war and, intriguingly picks up on the recent advert produced by Unicef for Belgian TV, featuring an air-strike on the village of the cartoon Smuf figures. In the final scene, only Baby Smurf is left, weeping alone surrounded by wall-to-wall Smurf corpses. "It's the first Smurf snurf movie," writes Steyn.

What Steyn then goes on to write is quite illuminating and, when I first saw the reports of the advert, I hadn't thought of it – which is why, no doubt, Steyn has a highly-paid job and we languish in the obscurity of EU Referendum. In real conflict, he writes, like in Rwanda, Sudan and a big chunk of west Africa, air strikes are few and far between. Instead, millions get hacked to death by machetes. Even on the very borders of Eutopia, hundreds of thousands died in the Balkans in mostly low-tech, non-state-of-the-art ways.

Why, he then asks, would Unicef show such an implausible form of Smurficide ? Well, whether intentionally or not, they are evoking the war that most of their audience - in Belgium and beyond - is opposed to: the Iraq war, where the invader had an air force. That's how the average Western "progressive" still conceives of warfare, as something the big bullying Pentagon does to weak victims.

By coincidence, in today’s paper we have a report about a strike by American fighter jets and combat helicopters in Ramadi yesterday, in which about 70 people are reported killed.

The report comes with ritual claims that women and children, and "innocent civilians" have been killed, very much reinforcing the perception that those stupid, "trigger-happy Yanks" have blundered again. However, writes the Telegraph in a grudging attempt to be even-handed, American officials like to emphasise the precision of their strikes and talk of the training troops take to control aggression in order to target only those threatening them and not nearby civilians.

It goes on to state that "the reality is often very different." In the confusion of a firefight soldiers often shoot wildly at a number of targets, while the difficulty of gathering intelligence of what is happening on the ground means mistakes are made in interpretation.

Nevertheless, the paper does concede that anti-American groups invent or exaggerate civilian deaths to reinforce the belief among many Iraqis - particularly Sunnis who dominate Anbar province of which Ramadi is the capital - that Americans do not care who they kill and regularly slaughter civilians.

The black propaganda art of faking news scenes is well known to the readers of this Blog and the Telegraph does not even begin to do justice to the American determination to avoid civilian casualties . Nor indeed does Steyn, although this is not precisely the focus of his piece.

What has not percolated the media is that, again, there is another technological revolution going on. Far from seeking bigger and more destructive ordnance, US technology is focusing on smaller, more accurate weapons, increasing precision and targeting systems which reduce the possibility of error, all to avoid what is known in the jargon as "collateral damage".

Already, ground controllers calling up air strikes routinely take digital photographs of designated targets and e-mail the pictures to attack aircraft, so that pilots can make visual confirmation of target identities before launching their weapons. 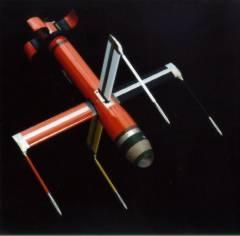 The latest generation of cruise missiles is even more sophisticated. The missiles have optical recognition computers and software, linked to video cameras. Before a target is attacked, video pictures of it will be taken by a drone or manned aircraft, downlinked for command authorisation and then uplinked to the missile. It will then video its designated target and compare the images with the information it has received and abort if they do not match.

Fruits of this technology are emerging in the form of the "Viper Strike" missile. Based on an anti-tank missile, it is now being developed to carry a 7lb explosive warhead, with an attack profile that makes it ideal for urban warfare.

Recently, to demonstrate its precision-attack capability in an urban environment, a stationary pickup truck was parked between construction trailers simulating buildings. The missile’s TV camera acquired the target, and the laser rangefinder designated the truck. The Viper Strike destroyed the truck with minimal damage to the trailers. 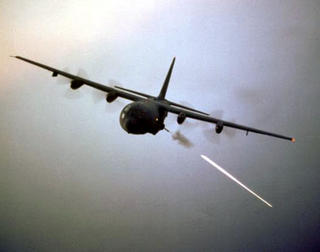 Interestingly, the missile can be launched from unmanned drones and it may be used to equip the fearsome AC-130 Spectre, the "gunship" version of the Hercules transport aircraft. This mounts a range of formidable weapons, including a 105mm howitzer, linked to precision targeting systems. Discussing the latest version with one of its pilots, he told me that they use old cars on the range for target practice and, so accurate had the system become that they no longer designated just the car they would hit, but could tell you the window through which they would put the round.

Elsewhere, enormous expense is being devoted to what is known as the "small diameter bomb" project, with $20 million already expended on research, for a 250lb bomb which will deliver with extreme precision a warhead of a mere 50lb, all in order to avoid the collateral damage often experienced with larger bombs.

All this is a far cry from Unicef's "Smurficide" film, which shows a cluster of large bombs raining down on the village. In so far as it is possible for war to be "humane", the United States is doing everything it can to make it so, expending huge amounts of treasure in pursuit of that objective. That is all the more reason why Mugabe's slur is so utterly despicable and why this snide anti-American carping is so malign.