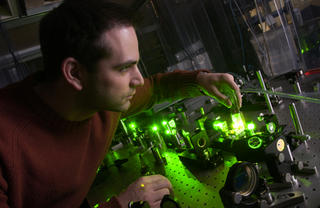 Piling on the agony, the Financial Times this morning retails figures published by the International R&D Scoreboard, showing that EU member states have fallen further behind in the research league.

According to this source, the increase in corporate R&D investment for 2004-05 was two percent in Europe but seven percent in the US and Asia. South Korea had the most spectacular annual growth - 40 percent - led by Samsung Electronics, Hyundai Motor and LG Electronics. The increase for Japan was a more modest four percent.

Only five years ago, the FT reminds us, member states committed the EU to becoming the world's leading knowledge economy by 2010. In a stark illustration of the difference between aspiration and performance, however, the scoreboard shows that European companies as a whole have not increased R&D investment over the past four years, while their US counterparts are spending 12 percent more on R&D than their four-year average.

Never mind though, BBC hack Angus Roxburgh, writing in the Sunday Herald yesterday, has just the recipe for boosting the EU's popularity.

What Europe needs, he writes, is a landscape dotted with signs saying "project financed by the European Commission". That, he asserts, is something people can understand. It may mean paying more rather than less into the EU's coffers, but that's surely preferable to belabouring us for another 10 years with vapid arguments about institutional reforms that will "bring Europe closer to its citizens".

From which pit of economic illiteracy did this man crawl?