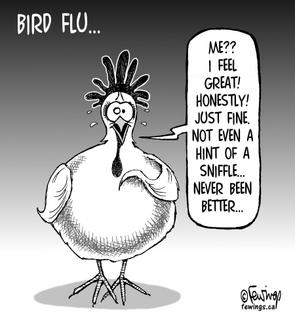 The Telegraph today has picked up the story we ran last night, awarding it front page status, with the headline: "Vets admit mix-up over parrot tests".

"Government vets," says the story, were accused of an embarrassing mix-up which may have thwarted the effort to discover how potentially lethal bird flu arrived in a quarantine facility in Essex.”

The rest of the story is somewhat muddled but it is interesting to see that the incompetence of Defra is fast causing an international incident. The news agency AFX is reporting a "Taiwan quarantine official" saying that their own tests "undermine UK bird flu suspicions", with results in from the farm that exported birds to Britain. They have found no trace of the virus in the facility.

Some 40 birds on the farm in central Taichung county were examined and none were positive for bird flu, says Chiang Hsien-choung, an official at the Bureau of Animal and Plant Health Inspection and Quarantine. This, he says, shows “that it was unlikely birds exported from the farm had spread bird flu to others in British quarantine.”

From AP, via the Scotsman the story develops with news that Taiwan is to raise an official protest with Britain over Defra's allegations, following a robust statement from Chiang Shien-tsong, who is in charge of disease control at the Cabinet-level Agriculture Council. "We will lodge a serious protest to Britain for the irresponsible allegation," he says.

Chiang adds that the Taiwanese farm exported 185 birds in September after being issued an official certificate attesting they were free from viruses, including the H5N1 bird flu strain. These actually arrived on the 27 September at the Essex quarantine facility, while the parrots had been there since 16 September, and the two which have caused the furore were not found dead until 19 October.

The time line alone tells you that it is most unlikely that the Taiwanese birds were linked to the infection and now the data from the Taiwanese authorities further suggest that once again Defra have jumped to unfounded conclusions.

Thus, the Taipei Times is taking no prisoners on the issue, recording Taiwan's representative in Britain as demanded an explanation "Debby Reynolds saying before test results were out that the Taiwan birds carried H5N1 has not only seriously hurt Taiwan's international image but also exposed negligence in Britain's quarantine," Lin Hsin-yi said in an interview with the BBC

"We demand a report and an explanation from Defra and at the same time express our gravest concern to the British government," he says.

Yet this is the dire organisation which forms our first line of defence again the disease breaking through into the human population, if indeed that can happen. It does not exactly fill one with confidence.