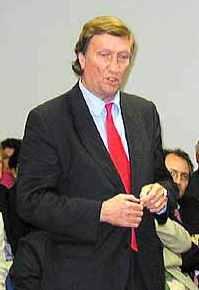 On October 13 Lord Dykes, a Lib-Dim and noted europhile asked the following question of Her Majesty’s Government:

“What are the foreign policy achievements of the European Union during the first half of the United Kingdom's presidency.”

Of course, the question is not entirely without guile. After all, asking what are the policy achievements indicates and assumption that there were some. However, the information is of use to all of us, though, reading further down one finds that Lord Dykes’s interest is in putting pressure on Israel to “launch negotiations immediately”, i.e. to sort out the problems created by the Palestinian Authority.

Setting that aside, Baroness Royall of Blaisdon, gave the following reply:

“My Lords, as the noble Lord rightly states, we are only halfway through our presidency, and already much has been achieved. To date, we have opened negotiations with Croatia and we have reached the historic decision to open accession negotiations with Turkey, which is the realisation of a presidency and EU priority.

Under our presidency, the EU has also played a key role in achieving successful outcomes at the UN world summit. It has established the first ESDP mission in Asia; built a climate change and energy partnership with China; set up a comprehensive framework for co-operation with India and agreed a visa facilitation and readmission deal with Russia. That is solid progress, on which we intend to build in the coming three months.”

Well, there you are. What great achievements. Starting negotiations that had been planned for years.

Since there was no particular outcome apart from a great deal of hot air at the UN world summit, one cannot quite say whether it was successful or not. Certainly, the abolition of poverty is as far away as ever and the aid industry is continuing on its harmful way.

Then there is that first mission. A little vague this – where precisely in Asia? It is a mighty big place. And a first ESDP mission? That’s European Security and Defence Policy to you and me. Here we have a British minister boasting that one of the British Presidency’s achievement is a further discarding of British policy or British interests. Of course, as we do not know where this mission is in Asia, it is entirely possible that no British interests were involved.

The engagement with China we know about. Among other matters, it included an assertion of the One China policy, that is a denial of Taiwan’s right to exist as a separate country. And by the way, how do you have a climate change partnership? In case the Baroness had forgotten, China has no intention of signing up to Kyoto and the EU has no other ideas about the subject.

The negotiations with Russia have clearly achieved nothing despite the careful censoring of any reference to unpleasant subjects like Chechnya and the growing control of media and political life by the government.

As achievements go, this does not add up to much. But then, does the good Baroness know what she is talking about? After all, she seems to think that the Presidency is half-way through and there are three months left to the end. Ahem, no. From October 13 to the end of the British Presidency there are two months left plus a few days, since everything winds down for Christmas.

We shall watch the future achievements with great interest.