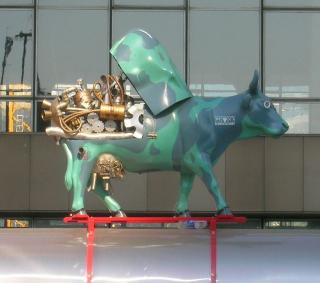 On the eve of Blair's European Council in Hampton Court, the latest figures on agricultural production in the EU will give the assembled governmental heads pause for reflection.

Despite the so-called reforms of the CAP, aimed at cutting back production, in the first seven months of 2005, milk production increased overall by 1.2 percent. This is almost entirely due to an 11 percent increase in Poland, providing a harbinger of things to come.

Poland has nearly 50 million acres of agricultural land (about 60 percent of the country's total area) but, under the Soviet regime, extremely low productivity 119 workers per 1,000 acres – compared with a US ratio is less than 4 workers per 1,000 acres. Over 75 percent of agricultural land is located on 2.7 million private farms and the average private farm in Poland is only about 15 acres.

But, as development money flows in, farm size and productivity is steadily increasing and the potential for increased production is being realised. And it is this dynamic that will eventually blow a hole through the whole agricultural system in the EU, as Poland and the other former Soviet-bloc countries – especially Hungary - start to reach Western levels of productivity.

The mechanical cow (above), seen at a Polish arts exhibition, may not yet have taken over, but dairy mechanisation and improvements will not be far from the minds of Chirac and his fellow travellers as they seek to resolve the budget crisis.