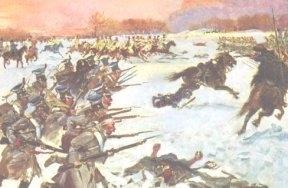 Roughly translated, the first line of the Polish national anthem means “Poland is not dead yet”. The text of what has been known as The Song of the Polish Legion or the Dąbrowski's Mazurka then goes on to tell the world that as long as Poles live, Poland will not die.

It is slightly unfortunate that the song was written for the Polish legion that was going off to fight in Italy for Napoleon, he having created a sort of independent kingdom after defeating temporarily the Russians.

But that is all in the past. Since then, the stirring words of the Polish anthem has given the Poles and, through them, other nations succour in times of trouble.

Well, Poland is once again a country and a member of NATO and, unfortunately for itself and others, of the European Union. But, it seems, the old Polish spirit lives on even in these days of peace. That was, at least, my conclusion on reading John Vinocur’s piece in the International Herald Tribune two days ago [subscription only on the net].

Entitled Poland holds to U.S., and EU sways it not, the article analyzes Poland’s attitude, in the wake of a slight electoral swing to the right, towards the European Union.

His conclusions are not surprising. It has always been clear to us on this blog that the new East European members of the EU will not change its economic structure. They may have introduced free-market reforms and low corporation taxes, which have clearly helped their economic development, but they remain client states. It is not easy to proclaim the advantages of a free, low tax economy while you are holding your collective hands out for a greater hand-out from the taxpayer of the high-tax west European member states.

On the other hand, the new member states have, as I claim to have said at a conference in Oxford, long before Donald popularized the terms Old and New Europe, a very different outlook on the world from the old ones. Their view is shaped by forty years of Communist rule, their struggle with it and their distrust of the Big Bear that is not all that far away and with whom France and Germany (and Britain) happen to be very friendly.

As Vinocur sums up:

Last month, the country elected a new center-right Parliament that will hold to what is pretty much both conviction and emotion here: that you stick to the Americans for security, support for your still great notions of freedom emphasis on the place of religion in society, and Polish independence.

You back neighboring Ukraine’s break from dictatorship to democracy to the hilt, and you wish insistently and out loud for democratic change in Belarus, another neighbour still under authoritarian rule.

The EU, rather more coolly, is associated mostly here with both caution and aspirations for prosperity – specifically the cash subsidies that are needed to sustain the Polish voyage to higher living standards.

As for freedom, the Polish mind-set on Western Europe had been indelibly marked by considerable hesitation there to openly support the Solidarity trade union’s rebellion against Communist rule in 1981.

No joke, an Austrian speaker recalled, but his country’s labor officials didn’t recognize Solidarity until 1989!

Poland, as our readers will recall, led the East European “rebellion” against the Franco-German attempt to dominate the European foreign policy agenda and, in l’escroc Chirac’s famous words, lost a great opportunity “to shut up”. With that one phrase the man wiped out the entire long and expensive French attempt to line the new members up behind France within the EU.

Most East European countries have troops or police in Iraq and Afghanistan. Poland, in particular, has been uncompromisingly Atlanticist in its foreign policy. Successive governments and presidents have made it clear that a European identity in foreign policy was non-existent and not to be relied on.

Furthermore, as we have commented in numerous postings, the EU played very little part in the Ukrainian development last year, and has refused to get involved in Poland’s problems with Russia and Belarus. All these were dismissed as “bilateral matters”, though some of us had assumed that such a concept would not survive the creation of the common foreign and security policy.

As we have pointed out before, however, a common policy requires common interests and there are none. So, the EU continues to create foreign policy structures, make large and meaningless proclamations and promise to send troops (or something) round the world to sort other people’s problems out. Its own backyard, on the other hand, it cannot deal with.

The EU is not seen as a valid reference for the security of the country. We’re very sensitive to it at a time when Putin regards the new countries in the EU raising the possibility that Europe will be more hostile to Russia. The EU needs an ostpolitik which it hasn’t yet defined. We know the situation well and can help define a policy in terms of fundamental Western notions.

Or as the old Russian slogan enunciated by the few radicals that actually believed in freedom had it: “За Вашу и Нашу Свободу.” For your freedom and ours.