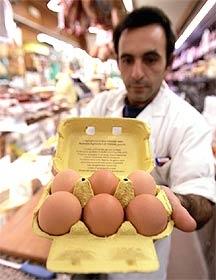 On the avian influenza front, most newspapers today in some way focused on the comments made by the European Food Safety Authority's director of science Herman Koëer. It was he who, yesterday, urged people to avoid eating raw eggs and poultry because of a "theoretical risk" of contracting bird flu.

"Alarmist and unhelpful" was the view taken by British farmers, according to the Daily Telegraph report, with plenty more condemnation from other sources. The best that could be said of the man is that he had been "naive".

The Scotsman recruits Professor Hugh Pennington, to say that the European Food Safety Authority had reiterated long-standing advice related to salmonella in a "quite inappropriate" way, arguing that the chance of a human catching the virus from eating an egg was "for all practical purposes, zero".

In Italy, where poultry consumption collapsed by at least 40 percent in September and has continued to slump this month, poultry farmers were more robust. They have accused the authority of spreading unjustified fears and demanded the resignation of Koëer.

So much for the great European experiment, an impartial food safety authority which was going to cut through the self-interest of national politicians, beholden to their lobby groups. This was to be the "brave new world" of the impartial Platonic guardians who were to deliver the best, most reasoned and impassionate advice to keep the embattled consumer informed. As it is turning out – just as we argued at the time of the formation of this monster – it is just another "scare factory" which muddies the waters at a crucial time, and leaves consumers even more befuddled and confused.

Mind you, reading through the cuts this morning, Koëer needs little help. The newspapers, in their own way, are continuing to spread alarm and despondency – and ignorance.

Here, the piece by David Derbyshire, self-styled "Consumer Affairs Editor", in the Telegraph (link above) is a classic example of the genre. He writes:

Although attention has been focused on the spread of avian flu to Britain, health officials remain more concerned about the risk of a human pandemic. They fear that the H5N1 virus could mutate into a human form of flu that spreads easily from person to person. Because there is no immunity to the virus in people, it could kill tens of millions of people.

Thus spreads not the influenza virus but a more virulent form of disease – ignorance – which pervades both government and much of the commentariat. On offer is this thesis that the H5N1 virus could "mutate…" etc., etc., but this is not how it is likely to happen – if it happens at all.

While indeed viruses do constantly mutate, the chances of there occurring a spontaneous mutation of one the specific sub-types (or clades) of the H5N1 group – so as the emergent strain retains its virulence characteristics and develops an affinity to man, as a host – is so remote that, to borrow Pennington's phrasing, it is "for all practical purposes, zero".

Reviewing the latest scientific texts on the evolution of infectivity in influenza viruses, the more likely scenario is one where simultaneous infection occurs in a single host with a specific clade of the H5N1 virus and a human adapted influenza strain.

As the viruses disassemble in the human cell – as part of the mechanism by which the replicate – and them re-assemble, they can end up swapping genes, by which means an avian adapted virus can acquire characteristics which confer on it the ability in infect man.

Crucially, this can only occur under very limited circumstances, which presumably explains why H5N1 viruses have been circulating for over ten years, without any signs of them becoming human host adapted.

However, given that it could happen, the points at which it will most likely occur is birds which have close contact with man (i.e., domestic fowl) which then become co-infected with human influenza and H5N1, or people in close contact with these birds who have the opportunity acquire both viruses.

In epidemiological terms, this is vital information. If the disease breaks out into the human population, it is most likely to be seen first in poultry workers or other occupational groups which have close contact with birds. These groups are our "sentinels" who should be watched very closely for signs of disease, isolated and tested at the very first sign of their developing flu-like symptoms.

But, for all the intellectual firepower devoted to this problem, both at national and international level, we have the scientific director of the EFSA prating about a non-existent threat, while most of the energy and concern is focused on migratory wild birds. Yet, as far as the simple expedient of warning health authorities to watch out for poultry workers – and especially farmers – becoming sick, no advice has been given.

Rather like getting satellite television, when instead of suffering four channels of rubbish, you gain a further hundred or so extra rubbish channels, it seems spreading food safety competences to the European level, and multiplying the number of officials involved, also multiplies the rubbish.