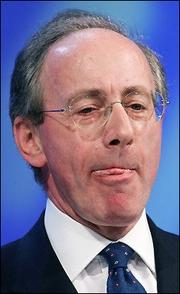 Although it was widely acknowledged that Rifkind stood no chance of being elected, many still wanted him to remain in the ring as his presence would have enabled the other players to judge the relative levels of support for each of the four main candidates.

Under the arcane rules of the ballot, in which only the 198 Conservative MPs are allowed to vote in the first stages, one candidate only is knocked out in each of the rounds until there are two candidates left, when the choice is put to the party membership.

With four "serious" candidates and the sacrificial Rifkind in the ring, MPs would have been able to cast their votes for preferred candidates without having to think tactically, by which means it was expected that this first round would have been used as an opinion poll to judge the mood of a fickle and highly sophisticated electorate.

With one of the gang of four now facing the chop, MPs will be more inclined to vote tactically, one aim being to engineer the selection of the last two, to present a pair from which the preferred winner is most likely to be selected.

For instance, while the final pair could end up as David Davis – currently the front runner - and the youthful David Cameron, supporters of the younger man might feel that he would stand better chance in the final run-off against a less well-supported candidate such as Liam Fox.

Therefore, given a core vote sufficient to see him into the next round, some Cameron supporters might peel off to support Fox, in order to influence the rankings, while planning to return to their man at a latter stage.

Against that, there is a strong "anti-Clarke" movement building up. With the "bruiser" claiming 21 supporters against Fox's 15, undeclared MPs may back Fox in the first ballot, to ensure that Clarke is forced out at the first round, to a humiliating defeat.

Altogether, therefore, the first set of results, due next Tuesday, after nominations close on Thursday, may not represent anything other than the results of a complex, three-dimensional chess game, leaving the final outcome impossible to judge.