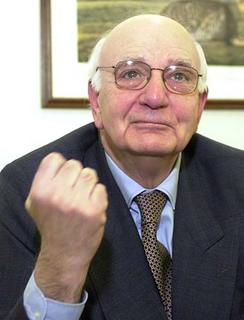 Paul Volcker, former Federal Reserve Chairman and the man hand-picked by SecGen Kofi Annan (father of Kojo) to produce a whitewash about the oil-for-food scandal, continues to astonish.

Giving his own evidence to the Senate Foreign Relations Committee he made it clear that he thought the UN would not reform itself if there were no financial restrictions. He opposed unilateral withdrawal of funds on the United States’ part but thought that that country and its allies (oh yes, it has quite a few, even if France and Germany are not among them) “should threaten to cut the budget of the United Nations if it fails to end corruption and adopt badly needed reforms”, as reported in the Washington Times.

By stating this Mr Volcker has aligned himself with President Bush and the US Ambassador to the UN, John Bolton. They have both made it clear that there was not support from the administration for

“a House-passed bill that would require mandatory cuts in the U.S. dues payment to the United Nations if it fails to adopt more than three dozen specific reforms in the next few years.”

The idea of an alliance to reform the UN, outlined by Paul Volcker as well as John Bolton, puts the ball right into the court of those countries who wish to “reform” the UN. Would they be prepared to line up with the United States and lay down certain conditions, employing certain not unreasonable threats? And if they are not prepared to do this, just how genuine is their desire to see crucial reforms introduced?

The article, incidentally, gives some of the figures involved in the oil-for-food scam:

“Mr. Volcker said his investigators estimate that Iraq earned about $12.8 billion in illicit payments under the oil-for-food program: $10.2 billion in smuggled oil sales to Jordan, Turkey and Syria, and $2.6 billion from bribes, kickbacks and other related scams. The overall figure is about $2.8 billion higher than a widely cited Government Accountability Office estimate given to Congress last year.”

Not chicken feed. One day we might have some idea of how much went in bribes to such luminaries as various French official and ambassadors to the UN, though, naturally, we are told by the French Government that its “principled” stand over the Iraqi war had nothing to do with all that money changing hands. Quelle blague!