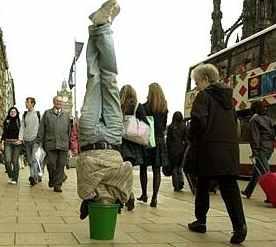 The News of the World this morning has printed a picture of a youthful George Osborne, currently shadow chancellor, with his arm around a woman described as a "cocaine-snorting hooker". This has been picked up by the Press Association and is spreading like wildfire. It will, without doubt, dominate the headlines today and for days to come.

The link is being made between Osborne and leadership candidate David Cameron who is, himself, embroiled in a controversy over his refusal to state categorically whether he used drugs during his university years and has acknowledged that a close family member went through a "dreadful problem" with narcotics.

We have been able to obtain an advance picture of Cameron making his statement denying everything (above left). Our only regret is that the bucket is not filled with water or something a lot stronger, like concentrated hydrochloric acid.

Throughout the leadership campaign so far, we have tried to stay focused on the issues, with special emphasis on the candidates' positions on the European Union. The tragedy now is that, with the media in feeding frenzy and the skeletons coming pouring out of the cupboards of these sad little oiks, this issue – and many others – are going to be buried.

With who knows what other "revelations" are to come, the leadership contest is wide open again and it is impossible to predict the outcome. But then, who cares? None of the candidates are worth a damn and the whole contest has become a total farce. The Conservative Party seems intent on committing suicide and there does not seem to be anything anyone can do to stop it.

We will continue in our task of reporting the EU and related issues but with a heavy heart, knowing that it is going to be a long, long time, before we have a political system sane enough, and adult enough to take note and do something about them.

Maybe, just maybe, out of the wreckage will emerge a grown-up party but, as always, we are not holding our breath.