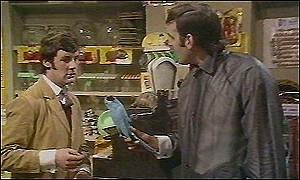 While the news on avian flu has been largely dominated by the discovery of an ex-parrot, as Monty Python would have it, struck down by the H5N1 virus, it has largely escaped attention that the UK no longer has the power to take unilateral action and must go cap in hand to Brussels for permission to ban further imports of pet birds.

This was confirmed this lunch time when the presenter on BBC World at One asked chief vet Debby Reynolds "...if Europe doesn't agree, is there any way that Britain could act on its own?" Her answer was blunt, and to the point: "No".

But, as we pointed out in our last substantive post on the issue, this is by no means the only thing being missed by the media at large, in what has developed into a classic health scare.

Media speculation, however, is not helped by the lack of detail in the official communications, such as the DEFRA press release on the ex-parrot, which talks of the "highly pathogenic H5 Avian Influenza virus" being found in the unfortunate bird.

But the release then goes on to announce that the "closest match is a strain identified in ducks in China earlier this year," adding, "it is not so similar to the strains from Romania and Turkey. It is not a strain that the Veterinary Laboratory Agency has seen before."

To compound the confusion, we also learn that the tissues from two bird samples were pooled in a single sample, so we are not actually talking about a single ex-parrot. Says DEFRA, "It is not possible to say whether both or only one of the birds was infected with the virus at this stage." Duh!

The Department's "working hypothesis" is that any infection in the birds from Surinam is likely to have arisen in the quarantine system, most likely in the facility in Essex where the Surinam birds shared airspace with the birds from Taiwan.

This hypothesis has invoked the wrath of Yeh Ying, the Taiwanese deputy director of the bureau of animal and plant health inspection and quarantine. She has called British veterinary experts "irresponsible" for saying a South American parrot picked up the infection from Taiwanese birds in British quarantine.

"The British authorities do not have solid evidence while making a statement implicating the possible source of a bird flu virus in another country," she said. "It's very dangerous and irresponsible."

It would help, of course, if the authorities made it clear to the media – and others – that the H5N1 description does not apply to a single virus, but a group of increasingly divergent sub-types or "clades", as Booker sought to do in his column yesterday.

Reports, he wrote, that the "lethal H5 strain" of the virus has reached Britain, via a now-dead South American parrot are so vague as to be meaningless. Millions of birds in Britain have been exposed to the "H5 strain". Even the more precise term "H5N1" does not name a distinct virus but a group of linked sub-types, only one of which has so far proved lethal to humans - and that has never been identified outside Hong Kong, Thailand and Vietnam.

He adds: "The H5N1 group has been around in densely populated areas of east Asia for at least 10 years; and, contrary to popular misconception, the tendency of viruses is not to become more virulent but the opposite (for the sound evolutionary reason that it hardly promotes survival to kill off your host)".

For those who can wade through the impenetrable thicket of scientific jargon, one of the most revealing accounts of the state of play can be found in a paper published by the US Center for Communicable diseases. Amongst other thing, this states that, while "H5N1 viruses from human infections and the closely related avian viruses in the 2004-2005 outbreak… belong to a single genotype," genes from the 2004 and 2005 outbreak "showed two different lineages of HA genes." These are termed clades 1 and 2. A further "clade 3" has also been identified, making three distinct subgroups, with human infection so far being confined to clades 1 and 3.

The fascinating finding here is that Viruses in each of these clades are distributed in "non-overlapping geographic regions of Asia" – in other words, they form distinct viral populations with their own separate distribution (shown on the map here). And, as can be seen, Taiwan is so far free from any isolates.

All this suggest, as we have tried to indicate, that this is far from the black and white picture of the spread of a single "killer virus", inexorably creeping towards the UK, poised to kill millions. In fact, we are dealing with the patchy, almost random distribution of a group of viruses with different characteristics, presenting different (and poorly understood) levels of threat.

In fact, from past history, it may not be any one of the viruses that presents the greatest threat, but DEFRA – which brought us the destruction of 11 million animals in the Food and Mouth epidemic – and the EU Commission which so expertly administers, amongst other things, the Common Fisheries Policy.

With such skill and expertise around, we had better hope that, indeed, the H5N1 viruses do present a great deal less of a threat than some of the more excitable commentators have indicated.