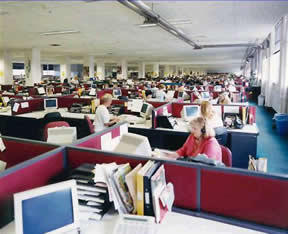 Having achieved next to nothing during the British presidency of the EU, Blair is now staking all on an informal European Council at the end of this month in Hampton Court, to discuss the implications of "globalisation".

Already, however, the fractious "colleagues" seem unwilling to stick to the script dictated by our Tony and, according to The Telegraph are threatening to derail the talks by insisting on talking about the unmentionable – the EU budget.

Our revered prime minister, we are told, now faces an ambush by Chirac and others, backed by the commission which is preparing a paper on how to respond to the effect of globalisation. El presidente José Manuel Barroso wants a multi-billion pound "restructuring" fund, aimed at workers who lose their jobs as a result of competition from China, India, or the other giants of globalisation.

According to one diplomatic source, the idea is that more spending by Brussels to soften the pain of globalisation could restore public faith in Europe, but the thinking is also that Blair would find it difficult to block calls for increased spending on such a worthy cause.

Quite frankly, though, one seriously wonders about the intellectual capability of the people who thought that one up.

European industries are groaning under the burden of red tape and taxation, increasingly losing out to more dynamic and competitive nations (i.e., those with less red-tape and taxation). Thus the commission wants to increase taxation so that it can give money to the losers, so making those that are paying even less competitive – which then presumably will be entitled to a share of the funds.

Of course, the one great merit of this idea, in the commission's eyes, is that it has all the elements of a permanent make-work scheme – for bureaucrats.