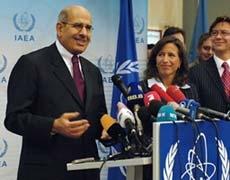 The Nobel Peace Prize has not been greeted with undiluted joy, not least because in the United States, at least, the blogs got in on the action before the MSM did, pointing out, as did we, of course, the stupidity and obvious anti-Bush, anti-American bias of the decision. But then, what can one expect from the tranzis, whose greatest enemy is the United States, a strong powerful democracy, determined to preserve its sovereignty and to spread its ideas.

Soon they will find other enemies, but, alas, the UK, part of the European Union, the one tranzi organization that has ambitions to be a state, will not be it.

Mr Mohamed El-Baradei, the third time Director General of the IAEA, an organization that, quite disgracefully, tried to influence the outcome of the American presidential election last year, has pronounced on the subject.

"The prize recognizes the role of multilateralism in resolving all of the challenges we are facing today."

In the meantime, the BBC has produced another gem. The World Service ran a poll of whom most people would like to see at the head of a fantasy world government. For most of us a world government run by the sort of people who inhabit the existing tranzis, is not so much a fantasy as a nightmare but the BBC, financed by the taxpayer, is clearly becoming a cheerleader in this outdated idea.

Unfortunately, the World Service listeners, viewers and readers of the website were not so taken with the idea. Breathlessly, it was announced that

“More than 15,000 people worldwide took part in the interactive Power Play game, in which players were invited to choose a team of 11 to run the world from a list of around 100 of the most powerful leaders, thinkers and other high-profile people on the planet.”

More than 15,000 worldwide? Gee-whizz, that is really indicative of opinion. That’s not even every employee of the various transnational organization by a very long chalk.

Still, it is interesting to see whom these people chose (and, please, remember that BBC listeners and viewers pitched on Karl Marx as the greatest philosopher of all times, though I think that was just a British poll). 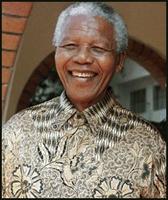 Top of the list is Nelson Mandela, who is, at present, the greatest of the feel-good characters. At least, there are a good many things to be said in Mr Mandela’s favour, though whether clever politics is one of them, remains to be discussed.

The second choice was Bill Clinton, who certainly was a clever politician but very little else. After that the list becomes shambolic to put it mildly.

Number three is the Dalai Lama, another feel-good personality and number four is Noam Chomsky. Who? Oh you know, the expert on linguistics and philosophy turned political oracle who specializes in endless perorations on the evils of every western government, especially the United States and Israel and the benevolence of such systems as that of Mao, Pol Pot and Kim Il-Sung, as well as, of course, Saddam Hussein.

Then we get in immediate succession Alan Greenspan, Bill Gates and Steve Jobs, obviously voted by people who believe in managerial politics. At least, one could argue that these people have achieved something in the real world, which probably means that they would not want to run the world, anyway.

Archbishop Desmond Tutu, Richard Branson, George Soros and Kofi Annan complete the list of eleven and a very fine selection that is of dubious meddlers with overweening ambition.

Tony Blair, apparently, came in at number twelve and Michael Moore at number fifteen. Bono was placed at number fourteen. Other placings were even odder. Hugo Chavez the socialist leader of Venezuela, busy destroying the country’s economy, came in at number thirty-three and Fidel Castro, the tyrant of Cuba at thirty-six, easily beating President Bush, who did get in at number forty-three. That must have annoyed the BBC somewhat.

And, of course, given a choice, the demented individuals, all fifteen thousand of them, would really like to have their lives run by Castro or Soros, rather than an elected president. Right, right.

Surprisingly enough David Beckham did not get above number 72, below Osama bin Laden. Of the women, Aung San Suu Kyi was number 13 and Hillary Clinton number 16. You do wonder what goes on in people’s heads.

It seems more than half of the participants (say 8,000 or so) were in the United States, which would suggest that there is too much free time among employees down in Turtle Bay.

What is so extraordinary is the BBC’s own self-importance. This is an extremely stupid pastime for an organization that struts on the world stage as a premier news and analysis organization. No tabloid would go in for anything this daft. But do they see it? Do they heck.

“The game - modelled on the hugely popular Fantasy Football - was run as part of the BBC's Who Runs Your World season, which explores where power lies in the 21st century.”

This is their idea of analyzing “who runs your world” even if the question had a meaning, which it does not?

And how were the various individuals picked?

“Users were required to pick at least one each from a select list of leaders, thinkers and economists, and had a free choice of any other eight, including the option of selecting "wild cards" from areas such as sport, politics, arts and design.”

Well, the BBC producers really know who and what is of importance in this world. Still, only 15,000 people, or just over, across the world took part in this nonsense. That is heartening. After all, not much more can be expected of that once great institution, the BBC. And there are still people out there who try to argue that it can be reformed.