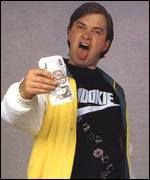 According to the Sunday Telegraph today, Eurocrats are preparing to splash out loadsmoney – running to millions - on a 50-day party to celebrate the European Union's golden jubilee.

In the planning stage is 50 days and nights of back-to-back festivities, all to mark March 25, 2007, 50 years since the Treaty of Rome was signed. Brussels believes that this is such a key event that planning began last week, 17 months in advance. Says Sophie Goeminne, who represents the Brussels government on the jubilee celebrations steering committee, said: "We are looking at a series of events around March 25, possibly starting on that date and running until May 9.

Amazingly, showing just how far detached from reality, these tranzies really are, Goeminne says, "This will be our way of bringing the EU closer to its citizens."

Mind you, if they need any lessons on how to spend other peoples' money – not that they do – they could turn up at our very own Department of Trade and Industry, one of the most "European" of our departments. Again according to The Sunday Telegraph, its officers have been spending loadsamoney on exotic trips, staying at top hotels and running up huge bar bills – all at taxpayers' expense.

This has been discovered by a confidential inquiry into the DTI's export agency, UK Trade and Investment, and has led to the sacking of one senior official and the suspension of three others.

Someone who has not been sacked yet is UKIP MEP Tom Wise, who was very much in money, having paid cash from the EU parliament into his own account that had been claimed for his research assistant.

However, while the unWise may have had loadsamoney, the Telegraph tells us he now has a lot less, having refunded £21,000 of his excess claim to the parliament. Presumably, the parliament will put it towards their anniversary celebrations.