Well, they didn't listen to us 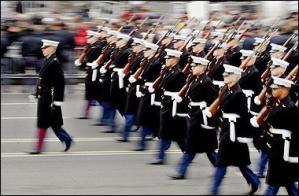 As our readers will recall, some time ago we suggested that the obvious candidates for the Nobel Peace Prize was the group of men and women who have done more to bring peace and liberty to many peoples across the world than anyone else: the US Marine Corps.

There was some discussion about other branches of the US Services and various solutions were proposed. My own favourite was my colleague’s proposal: this year the Marines, as they always go in first, next year the Army, then the Navy and then the Air Force. Then we can start all over again.

However, the Norwegian Nobel Committee, who has, in the past, awarded the Peace Prize to such lovers of peace as the late unlamented terrorist and mass murderer Yasser Arafat, decided not to listen to us. (Probably just as well – I might start worrying if they ever do.)

The winners are again the representatives of the Transnational Great and the Good, people who do very little good, often a great deal of harm and all for a great deal of money.

Mohamed El-Baradei, third time Director-General of the International Atomic Energy Agency and the IAEA itself have been awarded the prize. This is the organization and this is the official who have been completely unable to solve the problem of Iran and North Korea. How ironic that the prize should be awarded just a day after Iran has announced that it is placing its nuclear programme under military control, effectively thumbing its nose at the IAEA, the EU and any other organization from the alphabet soup. Way to go!