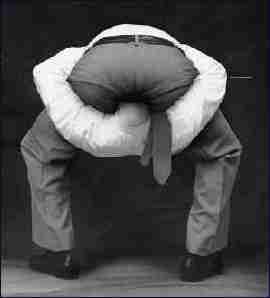 Never missing an opportunity to miss a point, the former "Vote no" campaign has re-emerged with a new coat of paint and the somewhat unoriginal name of "Open Europe" – so unoriginal that a Google search yields 44,400 entries, including a contribution from El presidente Barroso, headed: "Open Europe – the European Union leading in a globalised world".

Headed by Neil O'Brien, he of the "vote No" campaign, with Rodney Leach as chairman, the group launched itself yesterday as a "new campaigning think-tank", its task "to contribute bold new thinking to the debate about the direction of the EU". We are told that:

Open Europe will make the case for radical reform based on economic liberalisation, a looser and more flexible structure, and greater transparency and accountability.

Their logo comprises two eccentric circles, representing perhaps an unbalanced wheel, but perhaps it is symbolic of the lack of thinking at the heart of Rodney Leach's new toy.

We are told that the champagne and canapés were well received by the small number of guests at the opening – held in the Bloomberg building in the City, amongst whom were – briefly – Michael Howard, unaccountably wearing a black tie, and that not long after Cameron’s victory had been announced in the Tory leadership poll.

Presentations were made by from Rodney Leach, Derek Scott and Oxford Economic Forecasting, the latter having been commissioned to produce a report on the need for EU trade liberalisation and CAP reform, all on the theme of economic reform.

The fantasy bubble, however, was punctured by an intervention from David Heathcoat-Amory, who as the Conservative representative on the EU's constitutional convention, reminded everyone present that the European Union was incapable of reform. Interestingly, Friedman got there first, as did Lady Thatcher.

When Heathcote-Amory declared that what is needed is "a new relationship with the EU", and asked what were Open Europe going to do about that, silence fell upon the room. Leach looked dazed, his composure gone. Eventually, he got back into his stride and talked about the need for a renegotiation and, if that were to fail, then they might have to think about this "new relationship”.

Presumably, that is why they are calling themselves a "think-tank", their first thought being that the government should not agree to the new EU budget "unless there is clear progress towards opening up trade and reforming the EU." And, for their next trick, they are going to launch an "Open up" campaign, asking MPs and MEPs to back a campaign for free trade.

In between, we expect, they will be assuming their more usual position, illustrated above.