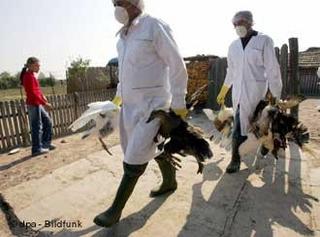 The papers today are full of the latest apparent spread of the avian flu virus into Greece, not least in the early edition of The Times.

According to this report, "the first case of bird flu has been found in the European Union after the detection of the H5 virus in a turkey in the Greek island of Oinouses". The report continues that preliminary tests of nine birds in the island have identified the virus as H5, but more rigorous testing is being carried out to determine if it is H5N1. This is described as "the deadly strain most feared as a possible source of a human flu pandemic."

We are told that tests are also being carried out in Macedonia after the deaths of more than 1,000 poultry at the weekend, days after the discovery of "the lethal virus" in nearby Romania and Turkey.

What appears to be the gradual progression of this virus has been accompanied by excitable predictions from the usual cast of characters which brought us dire warnings of hundreds of thousands of deaths from BSE. One such is Sir Liam Donaldson, the Chief Medical Officer, who has predicted that 50,000 Britons could be killed if this disease transferred to humans.

However, no one has yet topped the prediction from senior World Health Organization (WHO) official David Nabarro who, last month, warned that a bird flu pandemic could break out at any time and kill between 5-150 million people.

In the European Union, measures are being fronted by Health and Consumer Protection Commissioner Markos Kyprianou, who is spraying out instructions and recommendations with gay abandon and is about to outline plans for a Europe-wide simulation of a flu pandemic to test countries' preparations.

However, to his credit – or the good sense of his officials - Kyprianou is stressing that there is no need for panic. And well he might. The subject, as always, in the hands of semi-literate hacks is creating far more heat than light. This is a far more complex issue that they will allow for, and there are a number of issues which need to be borne in mind.

Firstly, the so-called H5N1 "strain" is not a single virus type but a closely linked group of sub-types, some with distinct characteristics. The isolates recovered from humans in Hong Kong and Thailand have all belonged to one specific sub-group which, to date, does not appear to have broken out of Asia. Therefore, the "deadly strain" recovered from Greece is most likely to be exclusively an avian strain of the virus, with no history of infecting humans.

Secondly, as always, this type of virus is prone to rapid evolution. The signs are that the H5N1 group is evolving into diverse and distinguishable groupings. And while the emerging mutations may adapt to man and acquire virulent characteristics, the virus has now been around in densely populated areas of China and Asia for at least ten years. So far, it has shown no signs of developing these characteristics.

Thirdly, while evolving virus may pose a potential threat to man, through increased virulence, mutation and cross-species adaptation does not necessarily involve transfer of virulence characteristics. In fact, an emergent virus, host-adapted to man, could well be benign, causing mild or even sub-clinical infection.

Fourth, in the continued evolution of viruses and other pathogenic agents, selective pressure is towards attenuation of virulence. The most successful pathogens are those which do not cause serious illness. This affords the greatest opportunities for transmission as the host remains mobile and in circulation. Virulent viruses, with very high mortality rates, rarely spread beyond the first foci of infection, as the death of the hosts limits opportunity for spread.

On this basis, the implications of the current "emergency" are most probably less profound than is indicated by the media and some of the shroud-waving medics.

Summing up the current situation, it is entirely conjecture that the sub-group of the virus which is potentially harmful to humans has been found in Europe. Most likely it has not. While the virus will most certainly continue to evolve, it is entirely conjecture that any mutation will necessarily be accompanied by any increase in pathogenicity to man, or that it will be virulent.

Then, it is entirely conjecture that a virulent strain, if it emerges, will necessarily spread rapidly. Apart from its effect on limiting host mobility, severe illness is more likely to be recognised early and contained, limiting the opportunities for geographical spread.

In this context, much is made of the huge mortality in the 1918 flu pandemic, although it should be remembered that the virus hit a population weakened by years of war, poor nutrition and inadequate, overstrained medical services, without access to modern, anti-viral drugs.

All said and done, therefore, we are dealing with conjecture, upon conjecture, upon conjecture. The balance of probabilities is that we will not be afflicted with a "pandemic" derived from one or other of the H5N1 virus sub-groups. The greatest threat is the serious economic damage in the national poultry flock. As much damage – if not more – however, may be cause by an over-reaction to a relatively low order of threat.

Over-reaction, of course, is something in which the EU commission specialises, so it will be interesting to see whether Kyprianou maintains his equanimity, or succumbs to the growing but – so far – entirely unwarranted air of panic that the media seems intent on fostering.