The president whose name we dare not utter 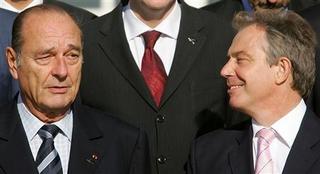 Not hours before L'Escroc Chirac disported himself on the steps of Hampton Court today, making cooing statement to Tony Blair after laying down la loi about the PAC - as the famously dislexic Frogs insist on calling the CAP - the crook's own former chief of staff when he was mayor of Paris, Michel Roussin (below right), was being handed down a suspended jail term of four years and a fine of £35,000.

Of what amounts to limited coverage of what is a massive corruption scandal amongst the French political élite – going right to the very top - it is The Telegraph that covers it best, also linking to an earlier report in March, when we also covered l’affaire.

In all, 47 politicians, many of them close associates of Chirac, were defending corruption charges, with allegations that the group took nearly £50 million in kickbacks after awarding school building contracts in the central Ile-de-France region, which includes Paris, between 1990 and 1995. 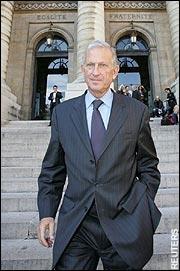 But what electrified the trial was the accusation made by Roussin’s defence lawyer, who spoke of "empty chairs" in the Paris courtroom, where the case was heard, declaring that one man missing from the proceedings was "the president whose name we dare not utter."

The main beneficiary of the kickbacks was, in fact, the RPR, the party L'Escroc founded in 1976 but, as president, he has immunity from prosecution. Predictably, he has denied knowledge of the illegal practices and has refused to give evidence on behalf of his former aides and colleagues, allowing them to be hung out to dry.

Another politician in the frame was Guy Drut, 54, an ex-sports minister who won an Olympic hurdles gold medal for France in 1976. He was given a 15-month suspended sentence and fined £35,000. Drut is a member of the International Olympic Committee but withdrew from Paris's failed attempt to host the 2012 Olympics to avoid embarrassing the bid. He was found guilty of taking a fictitious job at a construction firm.

Last week, another of Mr Chirac's former political supporters, Didier Schuller, 58, was jailed for five years, three of them suspended, in a separate case concerning the misuse of company assets. Schuller, who was freed pending an appeal, denied wrongdoing. It was, he claimed, like blaming a cabin steward for a plane crash, where the RPR was the airline, Chirac its president and former prime minister Juppé the pilot.