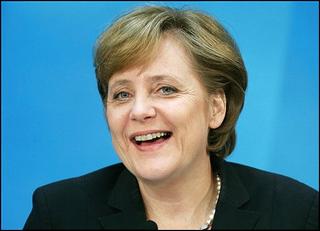 From the perspective of this distant observer, nothing about the strange political carry-ons in Germany make sense – but then many Germans would undoubtedly find British politics difficult to fathom.

However, at least the announcement that Angela Merkel would become chancellor removes the biggest question mark hanging over the political future of Germany, or so says The Financial Times. It also adds that, in many other respects, her elevation – or is it ascension - marks the beginning, not the end, of the horse-trading that will lead to the formation of the next government.

But government it will be in name only, as the portfolios have been distributed between the two parties. In addition to the chancellery and the chancellery's chief of staff a post that is being upgraded to a full cabinet portfolio the CDU and the Christian Social Union, its Bavarian sister party, are to receive six portfolios.

The economics ministry will be stripped of its labour market element and renamed the economics and innovation ministry. The new portfolio, which will go to Edmund Stoiber, the CSU chairman, will also spearhead European Union negotiations in industry policy. The CDU and CSU will also run the defence, interior affairs, consumer protection and agriculture, education and research, and family ministries.

This means that controversial portfolios are spread between two disparate political groups, leading The Times to comment that Merkel has had to pay a heavy price for the removal of Schröder.

It asks the obvious questions: will this coalition be stable and coherent? And can Merkel push through any of the changes urgently needed to reform Germany’s economy? Merke, of course, insists that she will, but only time will tell and the signs do not look good.

The Reuters news agency reports "leading officials" saying that Merkel will not risk what will be a fragile coalition by shaking up wage bargaining or trimming tax breaks for shift workers, fuelling fears among economists that it may shirk further painful reforms.

It cites Heino Ruland, an equity strategist at brokerage Steubing, declaring that, "Merkel has made too many concessions to become chancellor and this is definitely no ideal scenario for markets,"

As for Schröder, the BBC has him weighing up his options. But he has apparently ruled out taking up any ministerial post in the new cabinet, including the role of vice-chancellor. He could, however, bid for the job of President but some of his colleagues are speculating that he will end up with one of the plum EU jobs.

But there is even speculation that he could pitch for the job of UN SecGen after Kofi, of oil-for-food fame, quits next year. Now that would be really interesting.